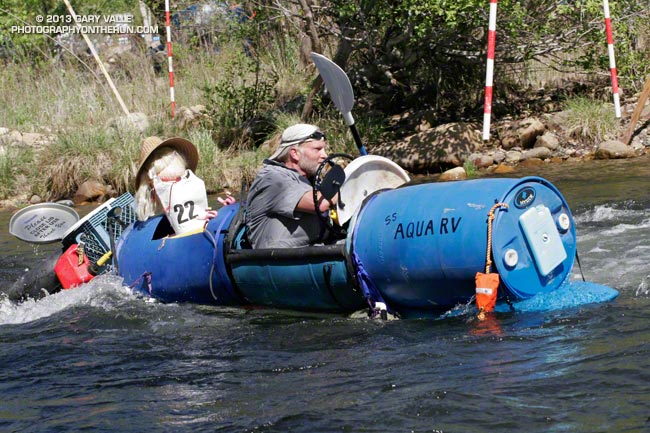 Last summer it looked like El Nino was ramping up for a moderate-level event and the buzz was that Warm Episode ENSO Conditions were pretty much a done deal for the Winter. Only no one told the atmosphere — and it didn’t cooperate with warming SSTs to produce the expected event.

This and other factors resulted in one of the most meager Kern snowpacks on record with the April 1 snow courses averaging about 23% of normal. The lowest was in 1977 when the April snow courses averaged 19% of normal. Not only was this year dry, but last year was also a low snowpack year. 2011-2012 and 2012-2013 ranked a close second to 1975-1976 and 1976-1977 as having the lowest snowpacks on record in consecutive seasons.

The shallow snowpack and a cold weather system the week preceding Festival kept flows in the 450-500 cfs range Saturday and Sunday. There was enough water for Hooligan Boats, SUP Races, Whitewater Triathlon and Slalom Race, but the Brush Creek races had to be cancelled.

The weather for the 49th edition of the Kern River Festival was perfect, and even with the low flow there was plenty of whitewater action. Everyone looked like they enjoyed paddling the Kern. I know I did. More info, results and photos can be found on the KVRC.org and KernFestival.com web sites.