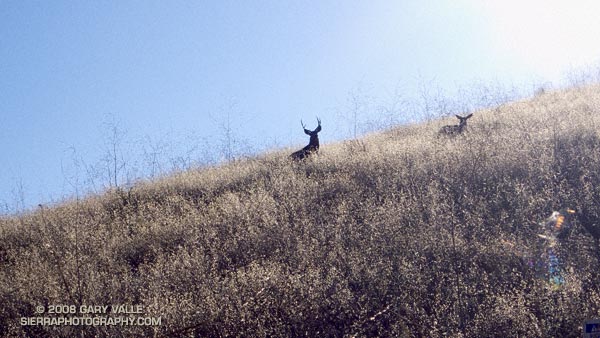 The afternoon was hot, and the hill was not easy. I plodded up the rutted dirt road, watching my footfalls, and glancing upward from time to time. It was one of those days when hills grow long and steep, and sweat stings your eyes.

Part way up the grade, I caught a glimpse of two deer crossing the road. I didn’t get a good look, but thought it might be another buck and doe, like the pair I recently encountered in Topanga State Park. I stopped running, pulled out my camera, and walked slowly up to the point where a game trail left the road.

I was expecting the pair to have dissolved into the brush, but apparently they had not seen me. They were about halfway up a rounded hill, backlit by the sun, and partially hidden by dried grasses and mustard stalks. The buck’s head was down, and the doe’s ears fluttered nervously to and fro.

Suddenly the buck’s head shot up. As I watched, the animal’s silhouette grew impossibly tall. His thick neck extended from heavily muscled shoulders, projecting an iconic image of dominance that was amplified by his formidable, multi-tined antlers.

Awestruck, I snapped what photos I could, and then turned and began to slowly jog up the road. Periodically I would stop and turn, and see if the deer were still in sight.  As I crested the climb, I could just make out the pair on the top of the now distant knoll.