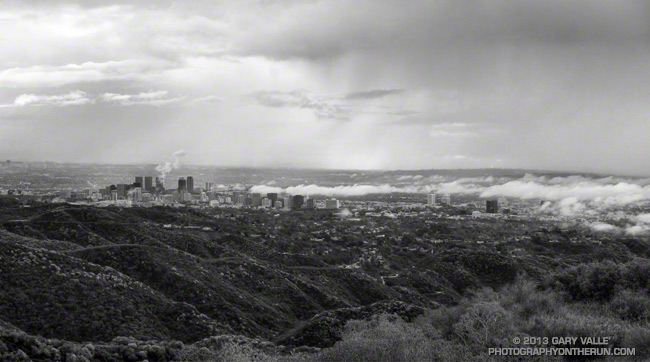 According to the 1981-2010 climate normals January, February and March are the rainiest three months at Downtown Los Angeles (USC). March is normally a little wetter than December, but close enough that the four months December to March “normally” account for nearly 80% of Los Angeles’ annual rainfall total of 14.93 inches.

But normal weather years only exist on paper, and those rarely seen monthly normals are just a reference so we may make comparisons from year to year. This water year Downtown Los Angeles was only about 0.2 inch under the normal amount of rainfall for December, but as of today is about 1.5 inches under the normal January total. When you add it all up Los Angeles is at about 63% of the normal total for the water year.

Although much of Southern California has recorded well below average rainfall, that isn’t necessarily the case across the board. LAX’s water year rainfall total currently stands at 89% of normal, and Santa Barbara Airport is at 94% of normal.

There are some indications (GWO phase and forecast MJO activity) that February might just have its share of wet weather. We’ll see!

Update February 13, 2013. Despite hopeful signs at the end of January and CPC’s above average Precipitation Outlook for Southern California for the period February 5-9 and February 7-13, Downtown Los Angeles (USC) has recorded only 0.02 inch of rain so far this February. Los Angeles water year rainfall now stands at 4.42 inches, which is slightly less than half of normal. Once again it looks like there may be some opportunities for wet weather in California during the last week or so of February, but the increasingly La Nina-like character of the atmospheric circulation suggests more rain is probable in Northern and Central California than in the southern part of the state. Again, we’ll see!

The photo of clouds and showers in the Los Angeles basin is from this morning’s run in the Santa Monica Mountains.