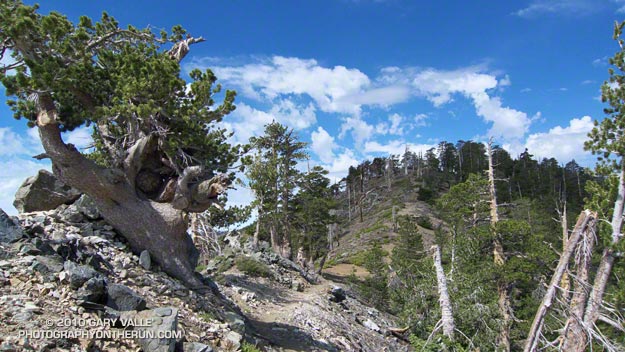 At an elevation of 9000′ the weather was sensational. Skies were partly cloudy, accentuating the terrain, and hinting of a thunderstorm later in the day. I was on the Pacific Crest Trail between Mt. Burnham and Mt. Baden-Powell, about 8 miles into a 18 mile run in the San Gabriel Mountains.

Remarkably, there was still a small patch of snow along the trail. According to seasonal summaries in Your Guide to Snowfall, the 2009-2010 season in Southern California was the best since the big Winter of 2004-2005. But it wasn’t necessary to check the snow history to know the snowfall had been above average. All that was needed was to look around, and the mountains told the story.

The remnants of snow were only part of the tale. Broken and downed trees told of strong Winter winds, and the stalks of red snow plant of a cool Spring. Now springs flowed freely and once dry seeps were damp and green. Wildflowers bloomed in profusion. Squat bumblebees waddled from flower to flower, and hummingbirds darted from patch to patch of scarlet bugler.

It had been a good Winter. Sugar pines were heavy with pine cones, and new growth decorated the limbs of the white firs. The growth of tree seedlings in the Curve Fire burn area seemed to have accelerated, and the protracted process of forest replacement was underway.

Southern California’s erratic weather demands that plants and trees be opportunistic. In time they have learned that an El Nino Winter is often followed by one that is dry, and La Nina looms.