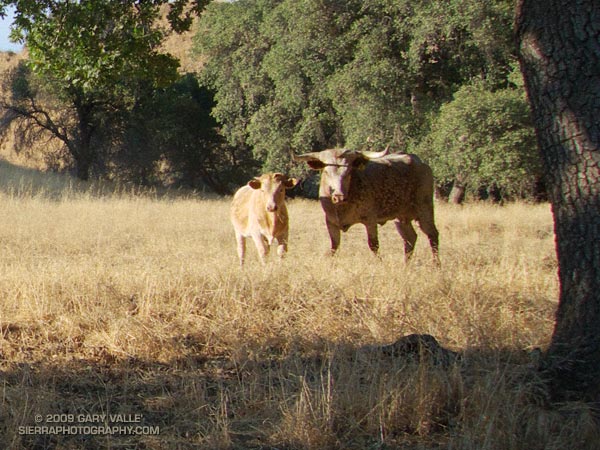 Part of the appeal of trail running is that even on a short weekday run, close to home, on a familiar trail, stuff happens.

The plan for today’s trail run was a simple one — run up and down the Chumash Trail in Rocky Peak Park. By the time we were done, a 5 mile run would morph into a loop of nearly 10 miles. We would encounter a rattlesnake and a longhorn bull, and we would run short on water. But we would also have a great run!

I’ve run in the Rocky Peak area for decades, and from time to time have encountered cattle near the end of Rocky Peak road. In recent years, the herd has been hanging out in the oil field and oaks between Las Llajas Canyon (near Poe Ranch) and a small mesa east of Rocky Peak road.

Seems to me most of the stock used to be Brahman, but these days there are many longhorns in the mix and according to an expert, these could be Longhorn, Corriente, or a Longhorn/Corriente cross.

When they heard us coming down the road most of the cattle just moved to another area — except for the big guy in the title photo. He made it very clear that no one should be messing with his heifers. He was a little agitated. While he didn’t charge us, it seemed possible he might. Avoiding any appearance of confrontation, we kept moving, and after a few moments were well away from the herd.

Here’s a Cesium browser View of a GPS trace of the Chumash – Las Llajas loop.