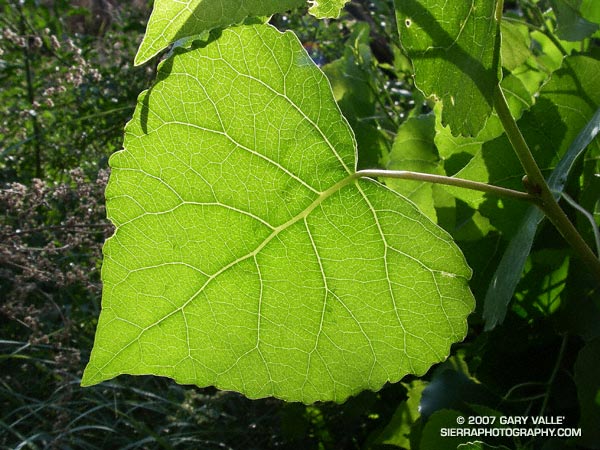 Who hasn’t pondered the intriguing network formed by the interconnected veins of a leaf? Like many apparently complex self-organized structures, there is a recognizable pattern, but the basis of the pattern is difficult to grasp.

Remarkably, research published in 2002 (S. Bohn et al., Phys. Rev. E, June 2002.) found that there is a simple relationship governing the angles between vein segments in the leaves of dicotyledons, and that this relationship is universal. The study also found that the observed vein angles can be reproduced using a simple force model.

Numerical analysis of leaf scans revealed that the angles between vein segments are directly related to the thickness of the segments. When the vein sizes are similar, the connection appears to form a three-way junction with the angle between the veins about 120 degrees. If the vein sizes are dissimilar, with one much larger than the other, the smaller vein joins the larger at about a 90 degree angle.

The photograph is of a leaf of a Fremont cottonwood (Populus fremontii) along Las Virgenes Creek in Upper Las Virgenes Canyon Open Space Preserve. It was taken on a run from the Victory trailhead on May 16, 2007.