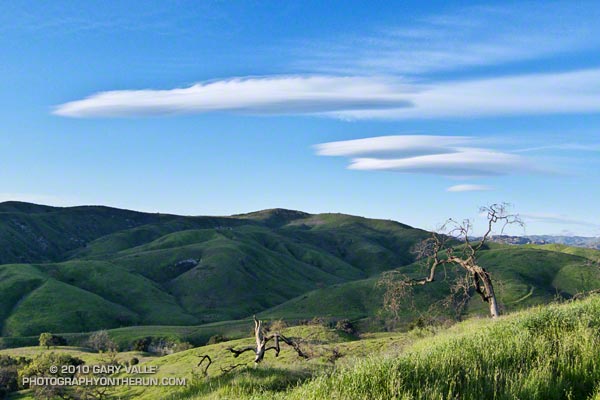 Because of their unusual “flying saucer” appearance, lens shaped lenticular clouds have long drawn attention. According to a research article in Weather, depictions of wave clouds appear in Gothic art from the 15th century.

Lenticular clouds typically form when wind flows into, and then up and over a mountain range, creating a series of “roller coaster” atmospheric waves downwind of the range. Lenticular clouds can (but don’t always) form in the peaks of the waves, as a layer of air rides up a wave, and cools and condenses. The waves are called standing waves because the peaks and troughs can stay (more or less) in the same place for hours at a time.

The rising air on the windward side of a lee wave can be soared by gliders to high altitudes. According to the FAI, the current world absolute altitude record for gliders is 15,460 meters (50,722 ft.). This record was set by the late Steve Fossett in 2006, soaring a mountain wave in the Andes. Mountain wave soaring was pioneered on the east side of the Sierra, and several single place sailplane world altitude records have been set soaring the Sierra wave.

Lee waves also have a nefarious side. Rotors, breaking waves, and other phenomena associated with mountain waves can create extreme turbulence. A sailplane destroyed in early research on rotors was estimated to have experienced 16 g of acceleration. According to the Australian Transport Safety Bureau, “clear air turbulence associated with a mountain wave ripped apart a BOAC Boeing 707 while it flew near Mt. Fuji in Japan. In 1968, a Fairchild F-27B lost parts of its wings and empennage, and in 1992 a Douglas DC-8 lost an engine and wingtip in mountain wave encounters.”

Here’s an animated series of NRL satellite photos showing the waves pictured above, and the complex wind and wave pattern at the time of the photograph.