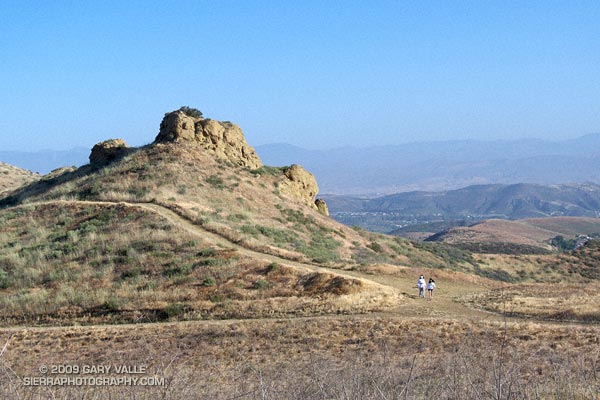 The fire road was covered with crawling and darting bees — so many I could feel the low, resonating buzz of the colony. Standing in the middle of the buzzing bees, I heard an “Oh crap!” from behind me. A mountain biker — stopped about 20 yards away — explains he’s allergic to bee stings.

We were a little east of the China Flat “T” on the Albertson “motorway” — a fire road in the Simi Hills. Taking advantage of cool, sunny weather in the Los Angeles area, I was doing a course I had not done for years, an out and back trail run from the Wood Ranch trailhead to Simi Peak, with a short circuit around China Flat.

I had taken a short detour to check a small vernal pool hidden in the oaks off the fire road. There are surprising number of these ephemeral water sources in the Simi Hills. They sometimes have water when it’s unexpected, but this time the pool was dry.

The bees on the road were digger bees, ground nesting bees that look like fuzzy honeybees. Like honeybees, males have no stinger. Males swarm over the burrows of females, waiting for them to emerge. Females can sting, but in my experience, and from what I’ve read, are generally not aggressive. Here’s a very short video (from later in the run) of a second colony on the Simi Peak Trail.

Not being able to risk being stung, the mountain biker waited on the side of the road for his buddy to realize he wasn’t behind him anymore. I headed back to the China Flat Trail, and then continued to Simi Peak. Here’s a Google Earth image and Cesium browser View of a GPS trace of my approximately 10.75 mile route.

Note: A mountain biker on the Long Canyon trail told me he had seen a mountain lion in the area earlier in the morning. He was certain that it was a mountain lion, and not a bobcat or coyote.