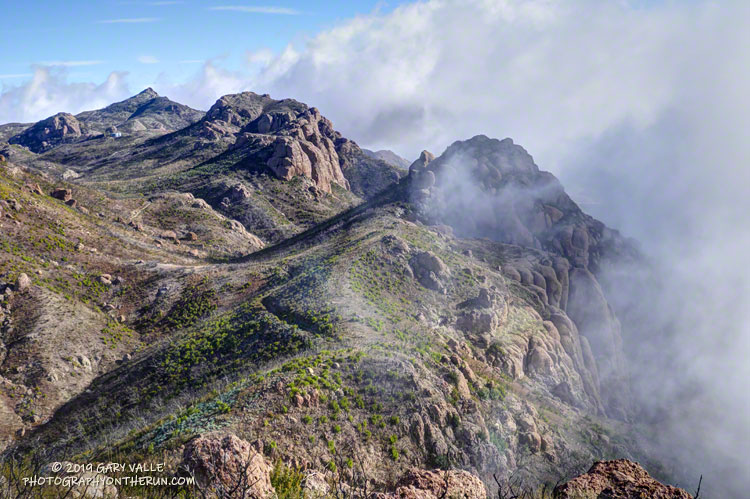 If you look at the traditional USGS 7.5 minute Triunfo Pass and Newbury Park topographic maps, BONEY MOUNTAIN refers to the large, mountainous plateau that extends roughly from Peak 2417 on the west; to Peak 2793 on the north; and to Sandstone Peak on the east. However, when people say they are climbing “Boney Mountain,” they are usually referring to a high point north of Tri Peaks, on the northwest corner of the plateau, above Newbury Park. This illustration shows these features.

This high point has an elevation of about 2935′ and is typically reached by ascending the Upper Cabin Trail or Western Ridge route. When climbing to this point, most start at one of the Satwiwa trailheads, such as at Wendy Drive and Potrero Road. The high point is NOT the same as “Boney Peak,” which on recent maps is ascribed to a peak adjacent to Inspiration Point, and has an elevation of about 2825′.

Today’s running adventure ascended the Western Ridge route to point 2935 and then worked over to the Backbone Trail, by way of Tri Peaks. Part of today’s adventure was to investigate a peak near the top of the Chamberlain Trail that is labeled peak 2880 on traditional topo maps, but is labeled “Boney Mountain” on many online, GIS-based maps.

The traditional, hand-crafted USGS 7.5 minute topographic maps were produced from about 1945 to 1992, with map revisions continuing until 2006. These maps are now part of the USGS Historical Topographic Map Collection (HTMC) and still widely used. The intended replacements are the GIS-based “US Topo” maps, first released in 2012. The USGS  topoView application can be used to view historical and current USGS topo maps.

The USGS “US Topo” maps are digitally produced from GIS data. As a result, some features traditionally included in USGS topographic maps — such as trails, landmarks, buildings and recreational features — may not be included. It also appears there have been some issues with geocoding placenames.

The conditions for today’s run were fantastic. Wind-driven clouds condensed along Boney Mountain’s western escarpment, spilling and tumbling over its edge in dramatic fashion.

As for the other Boney Mountain — Peak 2880 — it was brushy and the rock wasn’t the best, but climbing it did provide some fresh views of the Boney Mountain area. My guess is that the “BONEY MOUNTAIN” label, which described an area on the traditional maps, was treated like a point feature when geocoded. The nearest point happened to be Peak 2880, which speciously became “Boney Mountain.”

In the 2018 edition of the Triunfo Pass US Topo, the Boney Mountain label was moved to Tri Peaks, and the label for Tri Peaks was moved to another, unnamed, peak. In the current online version of the map, the Boney Mountain label and Tri Peaks label are at Tri Peaks. Over time the maps should improve, but until then, I’ll continue to use the traditional 7.5 minute USGS maps, or commercially produced maps that have been field verified.

And what about point 2935 – the high point on the crest that so many people climb? It really deserves a name. Given it overlooks the Danielson Monument and cabin site, maybe something like “Danielson Peak” would be fitting.

Here are a few photos taken on my hike and run.