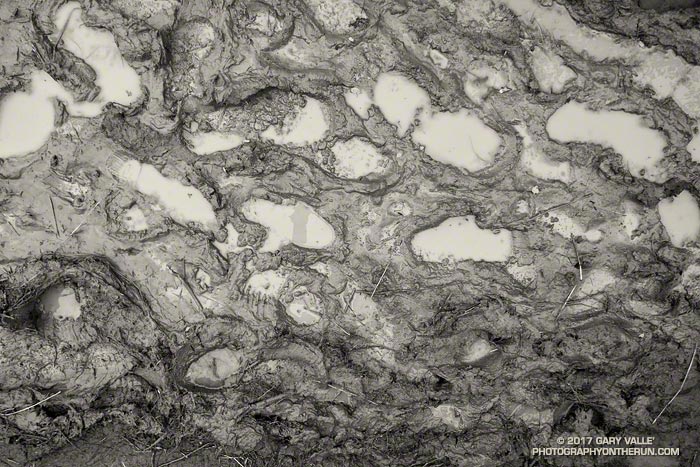 Even if it has been a bit wet — and muddy — it’s been great to have a more normal rain season. The rain has been very beneficial and has impacted the drought, at least in the short term. Just how much a continued wet rain season would impact the drought in the long term is a question that has to wait for future analysis.

There has been a five year precipitation deficit of nearly 36 inches at Downtown Los Angeles (USC). It’s hard to appreciate the size of this deficit while running in the rain, splashing through puddles, and trying not to slip in the mud. One tangible indicator of this deficit is that despite above average rainfall, many creeks in the Santa Monica Mountains and Simi Hills have remained dry or are barely flowing. Some have been dry for years.

Update Wednesday, March 1, 2017. The atmospheric river event on February 17 produced high flows on many local streams and many of these streams continue to flow. Rainfall totals in Los Angeles, Ventura and Santa Barbara Counties for the storm generally ranged from 4 to 8 inches with some higher totals recorded. On subsequent trail runs flooding, debris flows and erosion were noted in Upper Sycamore and Blue Canyons in Pt. Mugu State Park. Remarkably, some groundwater monitoring stations in Santa Barbara and San Bernardino Counties remain well below normal.

Update Tuesday, January 24, 2017. From Wednesday, January 18 through Monday, January 23, Downtown Los Angeles (USC) recorded 5.53 inches of rain, bringing the Rain Year and Water Year precipitation totals to 14.33 inches. This is 217% of the normal amount of 6.65 inches for the date, and 97% of the normal amount of rainfall for the entire Rain Year. It has been the wettest start to the Rain Year (July 1 – June 30) and Water Year (October 1 to September 30) since the very wet year of 2004-2005. There were high rain rates on Sunday, January 22, and Upper Las Virgenes Creek did finally flow for a period of time.

Update Saturday, January 21, 2017. From Wednesday, January 18 through Friday, January 20, Downtown Los Angeles (USC) recorded 2.53 inches of rain, bringing the Rain Year and Water Year precipitation totals to 11.33 inches. The average annual rainfall for Downtown Los Angeles is 14.93 inches. The rain, which was heavy at times on Friday, produced some flooding, rockslides and debris flows. Both branches of upper Garapito Creek are flowing as a result, but Saturday afternoon Upper Las Virgenes Creek was still not flowing.

Upper Las Virgenes Creek – February 22 the flow on Upper Las Virgenes Creek near the Cheeseboro connector and the two downstream crossings was enough that you couldn’t cross without getting your shoes wet. Previously, on January 24, there was no flow near the connector and only a slight trickle downstream. On January 21 the creek was not flowing and there was no evidence it had flowed during a recent storm.

Upper Sycamore Creek – Flash flooding, debris flows and erosion occurred on this creek following the heavy rain on February 17-18. Nearly 6 inches of rain was recorded at Circle X Ranch, which is also in the western Santa Monica Mountains. Previously, was flowing on February 4, but not on January 1, 2017.

If the wet forecast holds will these streams start to flow? We’ll see!