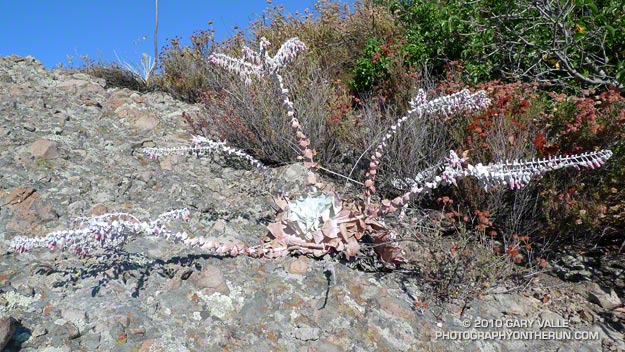 It was eerily quiet high on the mountain. No birds chattered in the chaparral, and it was so still the mountain seemed to be holding its breath. Sometimes in cloud and sometimes in sun I made my way along the rocky ridge. Was I on the correct route? In the thick brush and towering rocks it was hard to tell.

Descending along a narrow, rubble strewn path, I stopped at the base of a rocky outcrop. An odd plant was growing on the steeply inclined face, and I climbed up to take a closer look.

The plant looked as if it belonged in the Triassic. Long tentacle-like stalks radiated menacingly from a central spiral of pointed, wedge shaped leaves. The outer leaves of the rosette were wilted and rusty, and the entire plant had the chalky appearance of something that was part alive, and part dead.

I couldn’t quite see the structure of the flowers and leaned closer to take a photo. Suddenly…

This is the point in the story where the plant should grab me, or release a puff of toxic dust from its flowers, or do something equally malevolent. Not this time. But I can’t think of a more bizarre looking plant than a chalk liveforever on a rocky outcrop in full bloom.