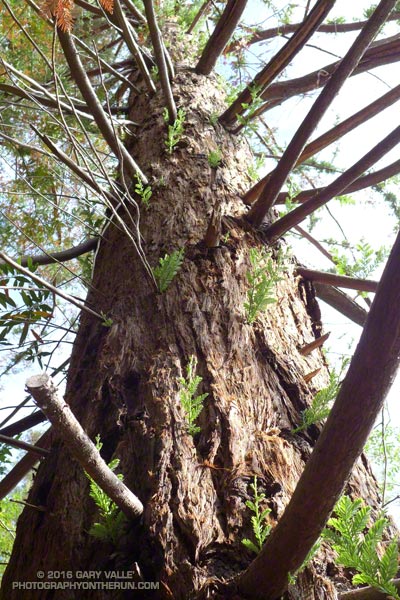 Recently, I revisited the coast redwoods along Century Lake in Malibu Creek State Park . Several months ago I’d been disheartened to find many of these trees severely stressed by our five year drought. Several of the trees had lost most of their foliage. Based on my own photos and those from Google Earth, the trees had rapidly deteriorated in just a few months.

I started at the the westernmost redwood near the junction of the Forest Trail and Crags Road and worked east along the Forest Trail. I expected to see a decline in the trees since my last visit, but surprisingly that wasn’t the case. If anything the trees looked they might be doing a little better.

From west to east I counted about 16 trees or clonal clusters of trees. Of these, the trees on the bank of Century Lake appear to be the most severely impacted. At least one tree, with poison oak growing up its trunk, may have died.

A common drought response is for a plant to reduce its foliage. The size of its leaves may be reduced and leaf shape modified to reduce water loss. In some cases trees will become dormant and lose their foliage. Trees may also enter seasonal dormancy early and the period of dormancy may be extended.

It’s been my experience that trees respond to severe water stress in a manner similar to losing their foliage in a fire. One redwood that had appeared to be dead in March, now has new epicormic sprouts over the length of its trunk.

Another mechanism by which a redwood may survive the drought is by clonal sprouting from buds in its basal burl. It is common for coast redwoods to have numerous basal sprouts and sometimes these develop into additional trunks.

The easternmost redwood is of particular interest because it appears to be naturally-germinated. For now it is stressed, but surviving.

The survival of these trees is not only dependent on the drought, but climate factors such as temperature and fog frequency and persistence. Only time will tell if some of the trees are resilient enough to survive.