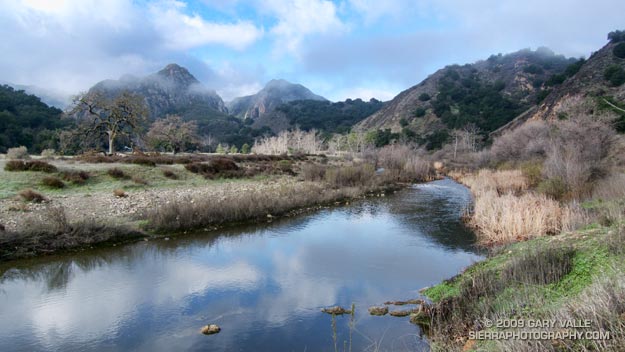 My trail running shoes had not been wet or muddy since sometime in December. During the entire month of January, Downtown Los Angeles (USC) recorded about one-third of an inch of rain. Not only had it been dry, it had been warm. On a dozen of those January days, the high temperature topped eighty degrees, setting a new record!

But Winter had returned. The past three days, Los Angeles had received about 1.5 inches of rain, valley and foothill locations 2-4 inches, and some mountain stations as much as 5-7 inches. And more Winter weather was on the way. Excited about the change in the weather, today’s run was one with good muck and mire potential — the Bulldog Loop in Malibu Creek State Park.

We were not disappointed. Near Century Lake, mud the consistency of peanut butter pulled at our shoes and slowed the climb up Crags Rd, Further west, near the M*A*S*H site, calf-deep water on the trail washed the gunk off.

The trail conditions on the remainder of the loop were more straightforward. From time to time, shafts of sun would pierce the clouds, resulting in a patchwork of shadow and sun that emphasized the rugged terrain. Along the crest, the ocean views were superb! Before descending to Tapia Park we ran out to Mesa Peak, and then followed the ridgeline to an overlook of the coast. (Marked peak 1800 on the topo.)

Including the side trip to the overlook, this variation of the Bulldog loop worked out to an exhilarating 16.5 miles, with an elevation gain/loss of about 2700 ft.

If current forecasts and outlooks for this month hold true, this won’t be our last wet and muddy trail run this February. In a couple of weeks, Los Angeles rainfall totals may climb above normal for the first time this rain season. We’ll see!

Some related posts: Fog Along Malibu Creek, Bulldog Loop and the Corral Fire