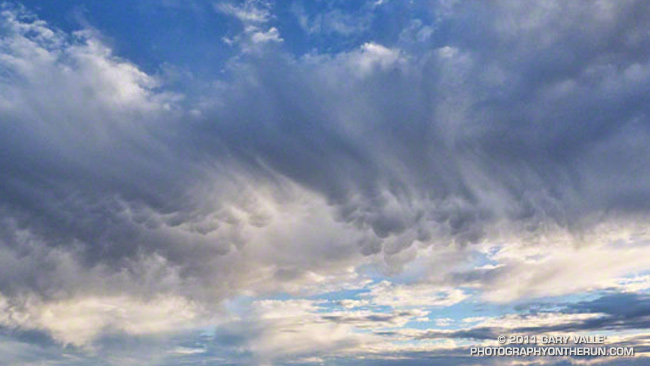 These rare clouds — a mid-level form of mammatus — were over the western San Fernando Valley last Thursday afternoon, January 6, 2011. They were produced by the moisture and dynamics associated with a closed upper level low that was about 390 miles WSW of Los Angeles, and moving ENE at about 17 mph.

I first noticed the mammatus clouds around 3:30 p.m. About 30 minutes later, when I started my trail run in the Simi Hills, the cloud band had shifted a couple of miles to the WNW, but the mammatus was still present. The title photograph was taken just a few minutes into the run, at about 4:07. This uncropped version of the image shows the clouds in relation to the terrain.

The mammatus was in the leading band of a series of cloud bands slowly moving from the ESE to the WNW. Over the next 30 minutes the mammatus mostly dissipated, as the cloud band became disrupted by shear. During this period the bands evolved into a wave-like sequence of bulbous clouds that had some of the characteristics of mammatus, but were not multi-lobed. The bases of these clouds were ragged — an indication that snow showers were sublimating in the dry air below. The photograph of the cloud sequence was taken at about 4:37 p.m. Some remnants of mammatus could still be seen in the sheared leading band.

The circumstances in which mammatus is observed and some possible mechanisms for its formation are discussed in the 2006 paper, The Mysteries of Mammatus Clouds: Observations and Formation Mechanisms by David M. Schultz, et al.

Based on a NAM analysis for Van Nuys and NKX (San Diego, CA) sounding, the atmospheric profile was consistent with real-time soundings when mammatus is present. A BUFKIT model sounding based on NAM data for 4:00 p.m., shows a moist layer from about 14,000 ft. to 23,000 ft., with a dry subcloud layer. The freezing level was indicated at about 8500 ft. A plot of vorticity from NAM data indicated a vorticity lobe in the area at the time the clouds were observed. As can be seen in both photographs, there was also strong shear between 20,000 ft. and 25,000 ft. A superadiabatic subcloud layer is not present in the soundings, but cooling from subcloud evaporation or sublimation might create one.

The photograph in the post Simi Hills to the San Gabriel Mountains was also taken on this trail run.