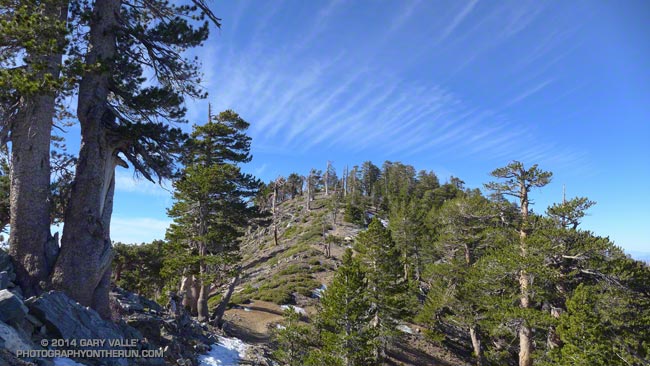 Mt. Burnham from the PCT

It’s been warm in Southern California. Thursday Bob Hope Airport reached a high of 90 degrees and it seems every couple of days another high temperature record is broken or one SoCal city or another is the hottest spot in the nation.
Not only has it been really warm, it’s been really dry. Downtown Los Angeles recorded only 0.2 inch of rain in December and not a measurable drop of rain has fallen so far this January. We already set the record for the driest calendar year, and at the moment we’re vying for the driest water year on record.

The unusually warm and dry weather made me wonder what the conditions were like in the Angeles high country. Might the PCT be runnable between Islip Saddle (6650′) and Mt. Baden-Powell (9399′)? As warm and as dry as its been, how much snow could there be?
At Islip Saddle there was very little snow. Here and there tiny remnants hid under the snowbush, but for the most part the north slopes of Mt. Islip looked more like July than January.

I encountered the first larger patches of snow and ice in the deeply shaded corners of trail before Little Jimmy Campground and Spring. It was easily traversed, but reminded me of November runs on San Jacinto Peak and San Gorgonio Mountain, when early season snow had melted and refrozen, turning sections of trail into a skating rink.
The thing is, it doesn’t take a lot of snow to transform a straightforward trail run into a slip and slide adventure, especially when the snow is icy. As warm as it was in the sun, several sections of the PCT between Islip and Baden-Powell never see the sun in Winter and were surprisingly cold. Even if it was 80-something degrees in the lowlands.

In this case if you wanted to bypass most of the snow patches you could do that by following the crest. On the way to Baden-Powell I tried to stay on the trail to see what sections were clear.  On the way back I climbed Mt. Burnham, Throop Peak, Mt. Hawkins and a couple other peaklets, so stayed on the crest.
Here’s a very short video (under 2 minutes) that will give you an idea what the conditions were like.
Some related posts: Snow, Sadie and Mt. Baden-Powell; Did Lightning Start the 2002 Curve Fire?; San Gabriels High Five; Running Hot & Cold