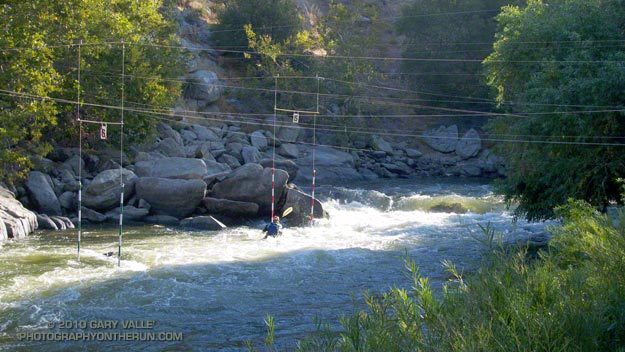 The high at Isabella Dam reached 102°F, but it was cool along the Kern River for the 2010 edition of the Miracle Whitewater Slalom Race.

Thanks to the efforts of firefighters, the Canyon Fire had been 100% contained the previous weekend, and did not burn Hobo Campground or Miracle Hot Springs, where the slalom course is located.

Last Winter’s big snowpack extended the season on both the Upper Kern and Lower Kern, and this year we were able to schedule the race in the Fall and still have excellent whitewater. Race day the flow came up to 890 cfs, a very good level for so late in the year.

The course was set so that no individual move was super difficult, but it was challenging to do the combined gate sequences well. Saturday, Olympic Silver Medalist Rebecca Giddens gave a pre-race clinic that helped paddlers deal with the difficulties of the course.

Thanks to everyone that paddled and helped with the race! Results will be posted on the KVRC web site soon.

Gates #1 and #2 were downs in the wave train at the top of Hobo Rapid. They led to gate #3 — a flushing up in small eddy on river left at the island. A peel-out to a down in the current, gate #4, was followed by a cross-current move behind the pour-over hole to an up, gate #5, at the base of the drop on river right. A tight turn out of gate #5 was required to setup gate #6, a dive gate that wanted to eddy-out your boat. This was followed by another up, gate #7, in a good eddy on river right. Next was a series of moderate offsets, gates #8, #9, #10, ending at the top of a small rapid. Gate #11, a down just below the drop, setup a move to river left through some turbulent water and a couple of rocks to an up, gate #12.

The move from gate #12, across several current differentials to the tight down at gate #13, was one of the trickiest on the course, and there were a couple of 50’s here. Gate #13 was followed by another down, which was offset from a dive gate on river left, gate #15. The dive gate was the lead-in to a nice left-to-right “S” at gate #16. Although it was in “easy” water, the next gate on river right, gate #17, was another up that was difficult to do well. Gate #18, a down, was the last gate.