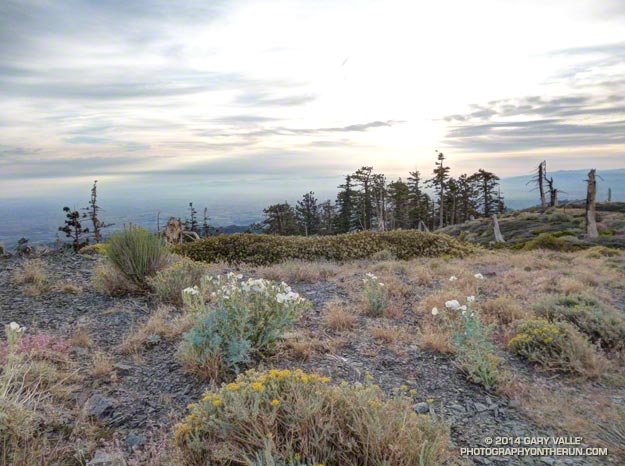 As I chugged up the Acorn Trail the eastern sky kept pace, becoming increasingly brighter with each stride. Dawn revealed a red-tinged layer of high clouds illuminated by a muted sun. This was good news. As late as Thursday afternoon the NWS forecast for the Los Angeles County Mountains on race day had been for typically hot AC100 weather:

.SATURDAY…SUNNY. HIGHS FROM 90 TO 100 AT LOW ELEVATIONS TO THE
UPPER 70S TO MID 80S AT HIGH ELEVATIONS. SOUTHWEST WINDS 15 TO 25
MPH IN THE AFTERNOON.
.SATURDAY NIGHT…MOSTLY CLEAR IN THE EVENING THEN BECOMING PARTLY
CLOUDY…

But even in Southern California in the dog days of Summer the weather forecast isn’t a given. One wildcard was the summer monsoon. A surge of subtropical moisture was forecast to move into Southern California over the weekend and it wasn’t clear just how much of Los Angeles County would be affected. Another wildcard was a low pressure wave that computer models showed rotating up into the Los Angeles area Saturday night. This feature would destabilize the airmass, increasing the chance of precipitation. As things turned out, both wildcards came into play.

After topping out on the Acorn Trail and following the PCT to Inspiration Point the layer of high clouds continued to gradually thicken as I worked my way over to Vincent Gap, up Mt. Baden-Powell, and down to Islip Saddle. With the sun heavily shrouded, the temperature was a non-issue, neither too warm or cool, and perfect for running. At around 11:00 AM the Big Pines RAWS near Mountain High reached a high of 79 degrees and then dropped back down into the 60s between noon and 1:00 PM.

A bit past noon I ran across Hwy 2 and into the parking lot at Islip Saddle (mile 26). It looked and felt like it might start to rain at any time.  The wind blew in fits and starts — as it does before a thundershower — and a few rogue sprinkles dotted the windshield of my car. I skipped the ice-water shower planned for this checkpoint, expecting that Mother Nature would probably take care of that all on her own.

Rather than an indicator of how hot and challenging the day was going to be, the climb from Islip Saddle to the Mt. Williamson summit trail was straightforward and in some sections actually a little breezy and chilly.

The somber skies accented the forms of the wind-shaped sugar pines along Kratka Ridge, and as I passed above Williamson Rock I wondered if ten years would be enough to get the climbing area and the closed segment of the Pacific Crest Trail open again. Running the final few yards into the Eagle’s Roost I was caught totally off-guard by the incredible aid station volunteers cheering, “Gary, Gary, Gary!”.

I didn’t think much about the weather between Eagle’s Roost and Cloudburst Summit. AC100 veterans had drilled into my head that the cutoff at Cloudburst was key. Make it through Cloudburst (mile 39) and you have a good chance of playing in the second half of the game.

Of course there was a trade-off to all the subtropical clouds. About halfway between Cloudburst Summit and Three Points I heard a low rumbling to the east. I waited for it to transform into the muted roar of a jet flying overhead, but instead was treated to an even louder and more distinct rumble of thunder. As I ran down the PCT from time to time I would feel a large, cold drip of water on the back of a leg, and couldn’t quite tell if it was from my water bottle or the sky. The rumbles and raindrops continued on and off the remaining miles to Three Points. 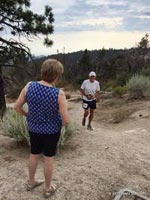 At Three Points (mile 44) I debated stuffing my three ounce shell into my waist pack. Several times I’ve experienced the fury and might of a big thunderstorm and know how quickly balmy temperatures can turn frigid in a deluge of rain, sleet and hail. About a half-mile after leaving Three Points it started to shower, and I hoped that leaving my shell there wasn’t a mistake.  It continued to shower on and off over the next few miles, but gradually the rumbles of thunder decreased in frequency and so did the rain. (Had a strong cell developed in the Mt. Hillyer area it could have been a real problem, like it was for a number of runners in this year’s Tahoe Rim Trail 100.)

Another runner and I joined forces on the road up to Mt. Hillyer. Once we were through the aid station the main concern became getting down through Horse Flats and to Chilao before dark. We had headlamps, but not using them before Chilao was a benchmark we both wanted to make. Things still looked gnarly to the east. Beyond Mt. Waterman and Twin Peaks dark gray skies were decorated with obvious streamers of heavy rain. To the west a thin ribbon of cloudless sky brightened the horizon.

As we worked our way down to Horse Flats Campground and then over and down to Chilao the sun dropped lower and lower in the sky, eventually finding the horizon and illuminating the underside of the clouds with an increasingly saturated crimson red. There was just enough light to run as Dave and I pulled into the Chilao aid station (mile 54) and at least for the moment, it wasn’t raining. 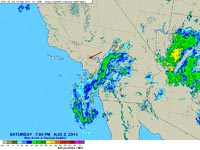 Judging from the rumble of thunder we heard just before leaving Chilao, the rain was not far behind. By the time Gary (my pacer) and I reached Poodle-dog Avenue on the way to the Charlton Picnic Area the showers were nearly continuous. The temperature was warm enough that it was a toss-up whether my rain shell helped or hurt. Here’s a NEXRAD radar animation of the rain from 7:00 PM to 10:00 PM Saturday evening as it swept across Los Angeles County. The red arrow is the approximate location of Shortcut Saddle.

It was still raining at 11:00 PM when we crossed a very wet Hwy 2 at Shortcut Saddle (mile 60.5) and started the never-ending descent to the West Fork San Gabriel River. Eventually reaching the nearly dry river, we laughed and thought back to March 2003, when we kayaked this stretch of river. Record rainfall had occurred the day before and we were worried the river would be too high. After carrying 70-80 lbs. of kayak and gear down the Silver Moccasin Trail we discovered the flow was perfect, and were able to complete the whitewater run from West Fork to Cogswell Reservoir and Hwy 39 before sunset.

Working up the hill to Newcomb Saddle it felt like I was carrying a kayak and it was definitely past sunset. Ideal running weather or not, my legs were just not cooperating. I would have several months to think about the run and what I’ve might have done differently. So many things have to come together to run a hundred miles.

The showers would continue sporadically through the night. One heavier shower occurred at about 3:15 AM at Newcomb Saddle (mile 69), after I had slept for an hour and just as we were getting ready to leave the aid station. It didn’t last long and most of our hike down to Chantry Flats (mile 75) was rain free.

Showers and thunderstorms continued in the San Gabriels on Sunday. One runner told me that leaving the Sam Merrill aid station he experienced the strongest winds he could recall encountering in the San Gabriels. From his description it sounded like it could have been the outflow of a downburst associated with a convective cell. Though runners did see some showers, the heaviest rain was in the high country in the area of Mt. Baldy and Mt. Baden-Powell. Mt. Baldy recorded 4.38 inches of rain from Saturday evening to Sunday evening. This resulted in flash flooding and numerous problems. The Big Pines RAWS recorded 1.53 inches and Crystal Lake 2.09 inches of rain over the same period. Here are some rainfall totals from the NWS (PDF) from around the area.

As you might guess the cool temperatures and showery weather were generally a big help to runners. The finishing rate this year was 66%, compared to about 60% in 2012 and 60.5% in 2013.