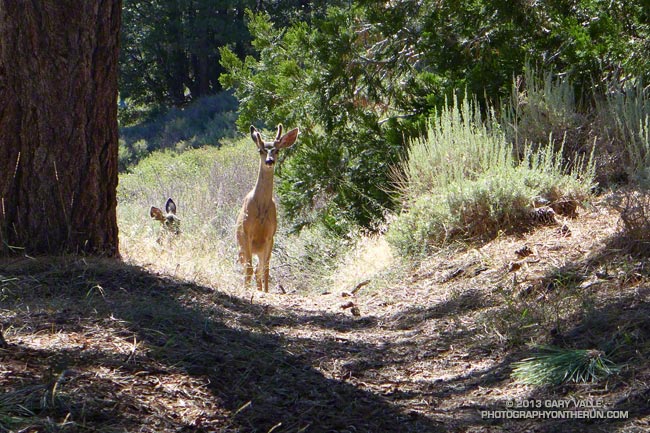 The trail run from Inspiration Point to Islip Saddle traverses a rolling section of the PCT along Blue Ridge, descends to Vincent Gap (6565′) and then climbs a switchbacking trail to the summit of Mt. Baden-Powell (9399′). The run continues along the crest of the San Gabriels on the PCT past several 9000′ peaks to Little Jimmy Spring and campground. From there it is a couple of miles to the parking lot in the saddle between Mt. Islip and Mt. Williamson.

A longer version of the run continues over the shoulder of Mt. Williamson to Eagles Roost. Many runners stop at Eagles Roost because of the now seven year (!) closure of the 3.5 mile segment of the PCT between Eagles Roost and Cooper Canyon. Continuing past Eagles Roost requires running 2.7 miles on Highway 2 to Buckhorn Campground, picking up the Burkhart Trail and following it down to the PCT in Cooper Canyon.

Today we were looking to do under 20 miles and keep the elevation gain to something sensible. Tim had run this stretch just a couple weeks before while doing the Angeles Crest 100 — his first 100 miler. Craig had crewed and paced a friend in the AC100 and was training for an upcoming 50 miler. Over the past several weeks I’d been doing a series of higher altitude runs and was also training for a 50 miler.

So far the run had been really relaxed and low key. We’d encountered a pair of young deer near Jackson Flat. They’d eyed us curiously before bounding off into the trees and the encounter seemed to have set the tone for the run. From time to time we stopped to enjoy a view point, look at the geology, or take a picture of a big ol’ tree. Rabbitbrush was blooming everywhere, adding a bright yellow accent to the rocks and ridges.

Earlier this year I photographed a bumper crop of cones on bigcone Douglas-fir in the Mt. Wilson area and here on Blue Ridge white firs had produced a huge number of cones. Other plants, such as bush chinquapin, had also produced large crops this year. Currant bushes along the trail had been productive, but because it has been so dry the fruit was smaller than normal.

The demeanor of the run changed part way up Baden-Powell. Mt. Baden-Powell is an immensely popular peak, and on a Summer weekend you’ll find an assortment of youth groups, fitness groups, hikers, runners and on rare occasions even an equestrian or two.

I stuffed another just-discarded nut bar wrapper into the back of my pack. That was a bad sign, and about two-thirds of the way up the peak things got a little crazy. The switchbacks above looked like escalators in a mall during the Holidays. People going up; people going down; people cutting switchbacks. A lot of people cutting switchbacks. At one point it seemed more people were short-cutting the trail than were on the trail.

Response: “I figure Indians hiked all over this mountain; it’s my choice where I hike…”

The mindset of the people that throw trash on the trail and shortcut the trail is much the same. They just don’t care. They don’t consider that someone else is going to have to clean up their mess. A person that shortcuts a trail doesn’t realize several other people — usually volunteers — are going to have to repair the damage. Cutting switchbacks causes erosion, tramples plants and looks ugly. It tells others that you are unfit and inexperienced.

A couple of switchbacks above the chaos settled, and when two young boys cut a switchback just ahead of me it was heartening to hear their father explain why that was a bad idea.

The summit of the Baden-Powell was not nearly as busy as I thought it might be. Just a few people were enjoying the great view from the summit. We took a short side trip down the south ridge to look at a lodgepole pine whose limbs and bark had been torn off in an ice storm during the Winter of 2010-11. In the same area was a stout limber pine that has a scar from a lightning strike. Later in the run we would pass another lightning tree near Mt. Hawkins.

The last several miles of the run were as relaxed and low key as the first few miles. Recovery continues among the ghost trees in the area burned in the 2002 Curve Fire, and the water and wildflowers at Little Jimmy Spring were as refreshing as ever!