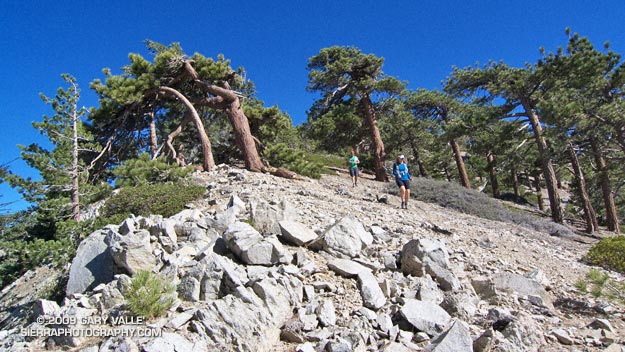 It was a little eerie. There wasn’t so much as an animal track or old bootprint on the trail ahead. The path was perfectly smooth, and I felt a bit guilty as my running shoes left their patterned tracks under foot. Lynn, Frank, and I were working up the Pacific Crest Trail on the west side of Mt. Williamson in the San Gabriel Mountains, near Los Angeles. As we switchbacked up the trail, the mountain seemed to sigh, happy to have enjoyed at least a few days of solitude.

Closed in early September by the Station Fire, this part of Angeles National Forest did not burn. It reopened in October, but is difficult to access because of the continuing closure of Angeles Crest Highway. To get to this point, we had run from the Antelope Valley side of the mountains. First up the South Fork Trail to Islip Saddle, and then along Angeles Crest Highway, through the tunnels, to the PCT near Kratka Ridge. A steep climb up the PCT put us where we were now — nearing the summit of the usually busy peak.

Of course that was part of the fun of trail running. By the time we reached the summit of Mt. Williamson, we would have gained about 3600′ of elevation, and would be a little more than half way through our 21 mile run. From Williamson’s summit we would head west along Pleasant View Ridge, and then descend the Burkhart Trail to Devil’s Punchbowl. The ups and downs along Pleasant View Ridge, and the “minor” climb out from Cruthers Creek, would add another 1500′ or so of elevation gain. 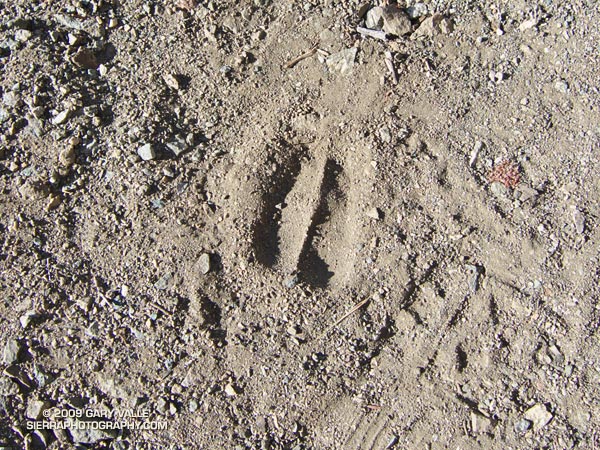 The run up the rugged South Fork trail had been interesting. Low on the trail we had picked up the blocky hoof prints of what was probably a large bighorn sheep. Intent on the tracks, and telling stories of Tom Brown and the Pine Barrens, we almost didn’t notice two deer hunters hiking up the trail ahead of us. Another mile or two up the trail we heard something large moving through the brush, and were surprised to see  a sizable black bear bounding down a slope. I wondered if it might be the sire of the cubs we had seen on this trail earlier in the year. A little higher still, we found a beautifully colored California mountain kingsnake, warming itself in a patch of morning sun.

Those encounters had been a couple of hours before. Now we were just below Williamson’s summit ridge. Reaching the crest, we ran the few remaining yards to its eastern summit. The visibility was stunning. To the south, we could see the thin ribbons of Catalina Island and San Clemente Island, more than 75 miles distant. To the east, Mt. San Jacinto loomed above the shoulder of Mt. Islip. To the north an indistinct line of white floated above the horizon. Was it the Sierra?

The 3 mile traverse of Pleasant View Ridge between Mt. Williamson and Burkhart Saddle was strenuous, but spectacular. The path along the ridge was also untrodden, and it wasn’t until Pallett Mountain that we noticed the first footprints. From Pallett Mountain the route dropped more than 3000′ — much of it excellent running on the Burkhart Trail. It wasn’t until mile 20, when we turned off the High Desert National Recreation Trail and started the mile descent to the Devil’s Punchbowl parking lot, that we finally encountered another person — a runner, jogging up the hill.

Here’s a Cesium browser View of a GPS trace (yellow) of the point to point route, and an elevation profile generated by SportTracks. Using the High Desert Recreation Trail as a connector (red trace in the Google Earth view), the route could be extended to a loop.