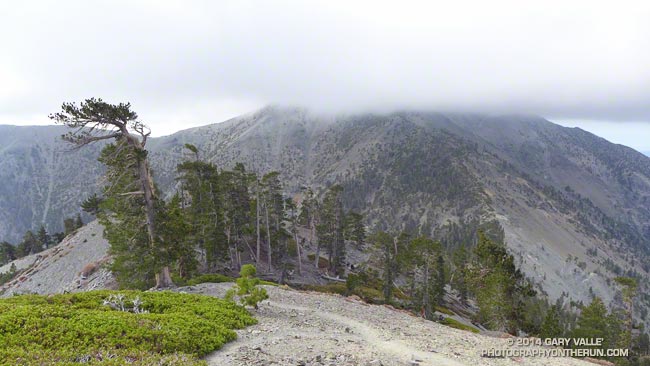 According to my car’s thermometer the temperature in the west San Fernando Valley was 86 degrees. To the east a large patch of middle-level clouds had morphed into a large lenticular cloud. Over the course of a few minutes the wave cloud continued to transform, dividing into a train of alto-cumulus waves.

I just shook my head. A few hours earlier and 60 miles away, I had been freezing. The plan had been to do a “Baldy Over the Top” run to the old juniper on the north side of Pine Mountain. Around 8:45 am, as running partner Ann Ongena and I crested the cloud-capped, 10,064′ summit of Mt. Baldy, the wind chill temperature had been around 30 degrees. The air temperature was in the low 40s, but with the wind blowing at least 40 mph and gusting to over 50 mph it had been brutally COLD. Especially in running shorts.

Spending zero time on the summit, we waved to the hikers huddled in the rock windbreaks as we sprinted by.  The hope had been that the wind (and temperature) would moderate as we descended the North Devil’s Backbone on the back side of Baldy.

It didn’t. Wind-driven clouds continued to sweep past the ridge as we ran down the steep path. At the first opportunity we stopped in the wind shadow of a clump of stunted lodgepole pines and put on wind/rain shells. The shells were three ounces of magic — without them it would have been foolhardy to continue.

As we descended to the Baldy – Dawson Saddle and then climbed up to Dawson Peak I kept looking back over my shoulder to the cloud-shrouded summit of Mt. Baldy. Were there more clouds? Was the ceiling lower? Was there more vertical development?

The day before I had checked the forecast from the NWS and the forecast models. A dissipating cold front was approaching the area from the north, but wasn’t expected to pass through until sometime tonight. No measurable rain was forecast for the Los Angeles area. The last time I had checked no clouds had been forecast for Saturday morning — but there they were. I had expected some southwesterly winds ahead of the front, but nothing like this.

I didn’t like being on the back side of the mountain in potentially bad weather knowing that “home” was on the front side. We had just enough gear to deal with the current conditions. I didn’t think it was very likely, but if the weather deteriorated…

Many of the incidents that occur in the outdoors are the result of a series of misjudgments. If you’re already on the edge it’s usually best to call it before things get REALLY complicated.

And that’s exactly what we did. After descending a short distance down the ridge from Dawson Peak we turned around. Even if the outing was going to be a bit shorter than planned, it was still going to be an outstanding hike and run in extraordinary conditions with over 6000 feet of elevation gain.

It was just as windy, cold and cloudy on the second trip over the top of Baldy as it had been on the first and we spent about the same number of milliseconds on the summit before picking up the Devil’s Backbone trail and running down.