If you have a passion for the outdoors, you can get pretty creative when devising a reason for doing a particular run, hike, climb, ride, paddle or other adventure. My rationale for today’s outing was that I “wanted to measure a tree.”

The tree is an isolated and aged Sierra juniper poised on a rocky ridge on the North Backbone Trail on the back side of Mt. Baldy. I’d noticed it while doing the North Backbone Trail in 2006. At that time I had estimated the girth of the tree from a photograph, using my cap for scale. I’ve been intending to get back to the tree for years, and hopefully that was going to happen today.

With one little twist. This time, instead of approaching the tree from the Blue Ridge trailhead on the back side of Baldy, I was going to start at Manker Flat, climb up Baldy, and then descend the North Backbone Trail to the tree. This meant I would get to climb Mt. Baldy twice.

It made sense to me. Labor Day weekend I had opted to do a run in the Sierra instead of the Mt. Baldy Run to the Top race. This way I could get in a good shot of elevation gain on Mt. Baldy, enjoy the wildness of the North Backbone Trail, and also measure the circumference of the Pine Mountain juniper.

Step one was to get to the top of Baldy. Instead of following the more circuitous seven mile route of the “Run to the Top” course, I took the most direct route to Baldy’s summit — the Ski Hut trail. This trail reaches the summit in a little over four miles, gaining about 3800′ of elevation along the way. It’s a rough, no nonsense trail that in its upper reaches has a wonderful high mountain character.

I was a little late getting to the trailhead, and started running up San Antonio Falls Road about 8:30. A little less than a mile from Manker I turned off onto the Ski Hut trail and started chugging upward.

What is it about a trail to the top of a peak that makes you want to push the pace? Even before I noticed the hiker below me, I was pushing it. I ran in the few places I could, but the trail was unrelenting. Was he going to catch me?

In retrospect, I might as well have stopped to pick gooseberries. I was trying to stay ahead of a runner who had averaged 5:40 minute miles on a championship cross-country course.

Hayk caught me just below the ski hut. From there to the summit we talked about running, racing, mountains and more. He had recently run a couple of marathons, and was interested in getting into ultrarunning. Even after slowing to my pace for the last two miles, his time to the summit from Manker Flat was a speedy 1:26.

It was clear above the haze in the valleys and low clouds along the coast. From Mt. Baldy’s summit, all of Southern California’s high points could be seen. To the east were the mountains of the San Gorgonio group and San Jacinto Peak; to the south Santiago Peak; and to the northwest an array of peaks in the San Gabriel mountains, including Mt. Wilson, Strawberry Peak, Twin Peaks, Mt. Waterman and Mt. Baden-Powell.

After spending a few minutes proselytizing about the great running in the surrounding mountains, I shook hands with Hayk and started jogging down the North Backbone Trail. Step two in this adventure was to get down to the tree.

After all the uphill on the Ski Hut trail, the first few yards of downhill felt pretty good. But as the trail started to plunge down Baldy’s north face, it became all too clear that THIS downhill came at a high price. Every stride down was going cost at least a couple of steep steps up on the way back.

Then there was the uphill on the downhill. The North Backbone isn’t a uniform, well behaved ridge. It has ups and downs. Big ups and downs named Dawson Peak and Pine Mountain. Just descending to the tree would require 1200′ of elevation gain, and there would be much more than that returning to Baldy.

I tried not to think about it. There was just too much to see and enjoy. The area’s complex geology had produced dramatic ridges, mile deep canyons, and 9000′-10,000′ peaks. There were windswept Jeffrey pines and gnarled and twisted lodgepoles. Rabbitbrush bloomed in profusion, its bright yellow flowers contrasting sharply with the greens of the manzanita. Here and there red daubs of paintbrush accented the sparkling tiles of gray-green Pelona schist. 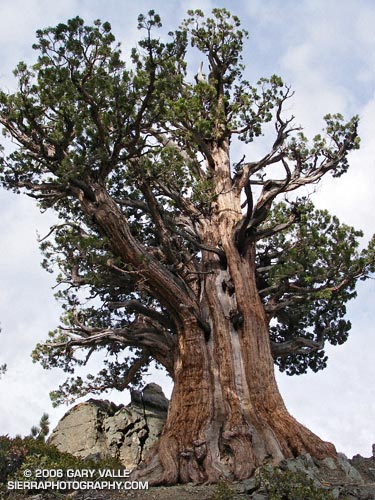 It was a spectacular place to be. After doing the North Backbone Trail for the first time in 2006, I came back the following weekend and did it again. It’s that kind of place — wild, scenic and adventurous.

How far down was that (dang) tree? I’d left the summit of Pine Mountain some time ago, and was still going down, down, down. The lodgepole pine forest on my right had the right look, but the slope to my left wasn’t steep enough. Maybe just down this hill… Is it at this little saddle? Just down the ridge a little more…

Epilogue: The circumference of the juniper measured 14′ 6.5″ or about 174.5 inches. See the post Pine Mountain Juniper for more info about the tree.