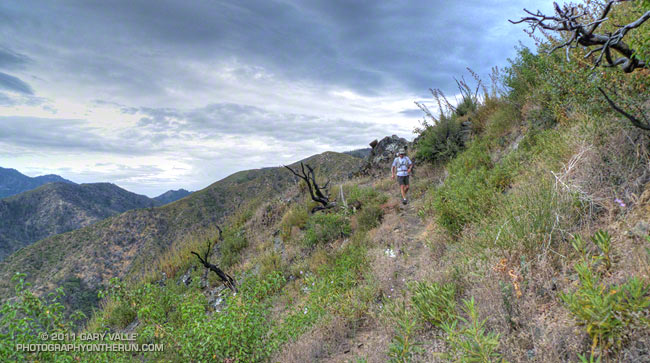 The plan earlier in the week had been to do a day trip to the Sierra Saturday or Sunday and run the Cottonwood – New Army Pass loop, but computer models had shown a monsoonal flow developing, and a look at a satellite image Friday afternoon confirmed the forecast. Friday evening Whitney Portal was hit by a flash flood with water and mud reported up to waist deep in the campground. Runoff from the t-storms was increased by rain melting higher elevation snow, and by the ground already being wet from the prolonged melt of this year’s record-setting snowpack. 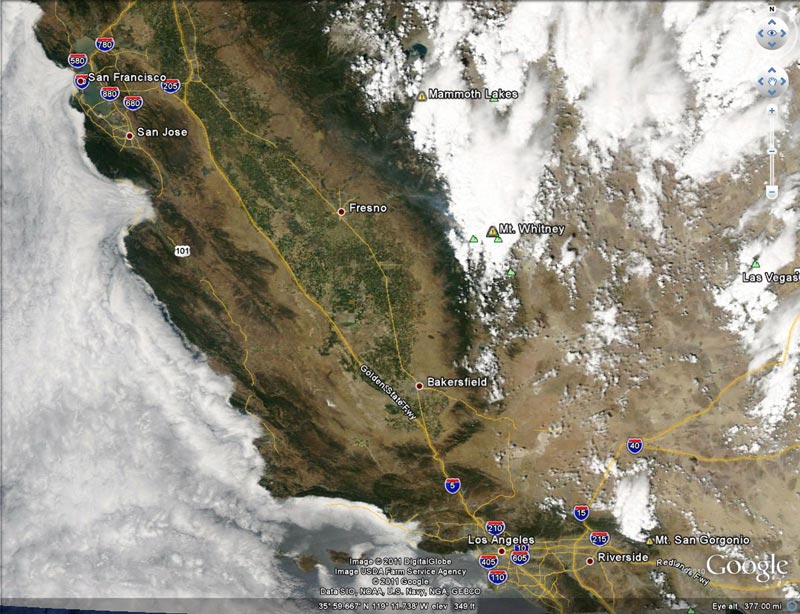 Computer forecasts indicated thunderstorms would likely continue in the mountains and deserts of Southern California through the weekend. Saturday I ran a few miles in the morning and then around lunchtime checked the weather in the Sierra. Strong thunderstorms had developed in the Southern Sierra, and a flash flood warning had been issued for the eastern slopes of the Sierra in the vicinity of Cottonwood Lakes Basin. Time to switch to plan B.

Plan B was to do a training run on the Mt. Disappointment 50K course. Mt. D is a figure-8 course, where each loop of the eight contributes about 16 miles and 3000′ or so of elevation gain/loss. Earlier this July there was a training run from Mt. Wilson on the Valley Forge – West Fork – Kenyon Devore part of the eight. Today we did another part of the figure-8 starting at Shortcut Saddle, running down the Silver Moccasin Trail to West Fork, then up to Newcomb Saddle, and then completed the loop to Shortcut on Edison Road. In the 50K, this loop would start at West Fork, but the sequence of trails would be the same.

Along with the race-ending climb up Kenyon Devore to Mt. Wilson, the climb out from the West Fork San Gabriel River to Shortcut Saddle on Edison Road is one of the more “memorable” sections of the Mt. Disappointment course. At least Kenyon Devore has some shade. Even on a blustery Spring day the 5.5 mile climb up Edison Road (2N23) can be a warm one, and in direct sun in the heat of Summer it can be downright scorching. Not so today — a layer of monsoon clouds, a fresh breeze, and an occasional drop or two of rain kept the temperature on the ascent disturbingly reasonable.

The run worked out great, but may have been a bit misleading in terms of preparing for Mt. D. It’s unlikely we’ll have a giant sun shade for the race like we did today!

Note: Weather stations on Mt. Wilson and at Clear Creek can be used to get an idea of what temperatures are running in the vicinity of the race course. Note that the temeprature specified is measured in the shade. In my experience the “fuel temperature” is a better indicator of the temperature in the sun. The fuel temperature is included in the Clear Creek listing.