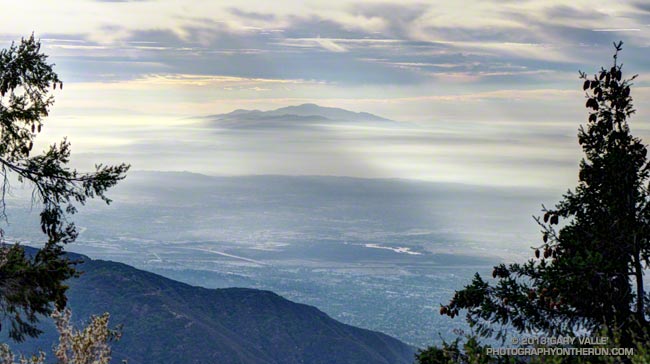 As I ran through the scrub oak near the summit of Mt. Wilson, my footfalls and the distant hum of a generator were the only sounds that disrupted the quiet of the early morning. A patchwork of high clouds covered the sky, muting the rising sun and prolonging the dawn-like light.

Suddenly, I caught the movement of something large off to the side on the trail ahead. It took a moment to decipher the scene, but over a second or two the camouflaged bowhunter emerged from the background of oak leaves and limbs. Never turning to look at me, he continued to creep up a game trail toward the observatory grounds.

I wasn’t sure how the bowhunter fit in the array of hunting seasons and regulations, but if the general deer hunting season was open in Angeles National Forest I hoped my bright blue shirt and yellow “rodeo clown” running shoes would make me appear sufficiently unnatural.

Unlike last week, today I had a plan — to run down the Rim Trail from Mt. Wilson to Newcomb Pass, then down the Gabrielino Trail to Chantry Flat and back up to Wilson on the Upper Winter Creek Trail. I had not done this loop and it would give me a chance to do the stretch of the AC100 course between Newcomb Pass and the Mt. Wilson Toll Road.

The Rim Trail is a key part of several Mt. Wilson loops. The trailhead is about a quarter-mile east of the Skyline parking lot along the lower paved road with the nature trail signs. It is an adventurous and scenic trail that switchbacks steeply down the rocky northeast shoulder of Mt. Wilson and then contours over to Newcomb Pass. The trail has many long stretches of outstanding running in a forest of bigcone Douglas-fir and oak.

I’d been on the Rim Trail a few times this year and today was glad to see the poison oak along the trail was leafless and the patches of Poodle-dog bush had been trimmed. It’s harder to spot the poison oak without its “leaves of three” but it seems when it is dormant it is less of an issue.

At Newcomb Pass I turned right (south) onto the Gabrielino Trail, joining the AC100 course and beginning the descent to Sturtevant Camp in Big Santa Anita Canyon. Of all the trails on today’s loop the Gabrielino was the most technical.

In true Fall fashion the temperature on the sun-facing, chaparral-covered upper reaches of Big Santa Anita Canyon contrasted sharply with the forested north-facing slopes traversed by the Rim Trail and along the streams in the depths of the canyon.

The running between Sturtevant Camp and Roberts Camp was superb. The forests of bigcone Douglas-fir, alder, California bay and bigleaf maple are remarkable and among the most developed in Southern California. The yellows of the bigleaf maples stood out brightly against the greens of the other trees, beacons of Autumn in a mostly evergreen habitat.

The 6 mile, 3100′ climb that starts at the green foot bridge below Chantry Flat and ends at the Mt. Wilson Toll Road is the biggest on the AC100 course. On today’s run it started at a little under the 10 mile point, but during the AC100 comes at about mile 74.

After huffing up the paved road three-quarters of a mile, I refilled my Camelbak at the picnic area at Chantry Flat and continued the loop on the Upper Winter Creek Trail. The uphill on this trail was mostly moderate and runnable, and there is even some downhill to be enjoyed on its descent to the Winter Creek Trail junction near Hoegees.

From the turnout near the top of the Kenyon Devore Trail (outside of Skyline Park) the loop worked out to about 17.5 miles, with an elevation gain/loss of about 4500′. Two shorter variations of this loop are possible. At about mile 6.5 the Sturtevant Trail can be taken directly back up to Mt. Wilson or the trail can be used to connect to the Mt. Zion Trail and eventually the Winter Creek Trail near Hoegees.