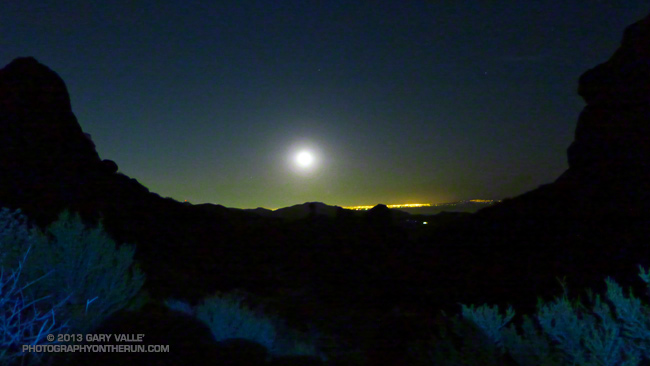 On my list of things to do to prepare for the Backbone Ultra was a night training run on a segment of the Backbone Trail we would be running in the dark.

Tonight was a good night for that training run for a couple of reasons. One was that the weather was going to be phenomenal. Today several record high temps for the date had been broken, including nearby Camarillo at 89 and Oxnard at 84. It would be warmer on tonight’s run than on many of the runs I’d done this Winter. Another was that adjusting for Daylight Savings Time, the moon would rise at about the same time and be in about the same phase as on the day of the event.

The plan was to do two out and back runs from the Mishe Mokwa trailhead. The Backbone Ultra starts at Will Rogers State Park in Pacific Palisades and ends at Ray Miller Campground, near Pt. Mugu. The Mishe Mokwa trailhead is at about mile 52 of the course. The first run tonight would be on the easier terrain of the Backbone Trail east of Mishe Mokwa; and the second would be a more difficult run past Sandstone Peak and down the Chamberlain Trail.

Ann, also training for the Backbone Ultra, joined in on the runs, and as it was beginning to get dark we set off eastbound (toward Etz Meloy) from Mishe Mokwa.

It would be hard to imagine better conditions for running at night; the sky was clear and the temperature in the 70s. Accompanied by a chorus of crickets, poorwills deepened the growing darkness with their enigmatic calls. Sirius, the brightest nighttime star, was to the southeast, behind Orion the hunter, whose sword belt of three stars was easily seen to the south. The planet Jupiter beamed overhead, even brighter than blue-white Sirius, but with a yellowish tint, hinting at the gas giant’s atmosphere of swirling clouds.

The perspective of terrain and time changes in the dark. You run more by how you feel than what you see ahead. Whether up or down, moderate hills look more moderate and gradual hills seem almost flat. Some runners say time seems to pass more quickly at night, others tell of arduous miles, wrong turns and distant aid stations.

After running an enjoyable three miles eastbound, we retraced our route and returned to Mishe Mokwa. After eating some watermelon, we grabbed our packs and headed up the Backbone Trail toward Sandstone Peak.

This out and back was going to be more difficult than the first, with about 3000′ of gain/loss over a sometimes rocky and technical 12+ miles of trail. With the event coming up in just a few weeks the last thing we wanted to do was something “stoopid.” During the day it relatively easy to check your watch, search pockets for missing jelly beans or salt tabs, eat a fruit bar, look around, and do other things on the run. At night, particularly on a technical trail, a much higher level of attention is required and there are many distractions.

The myriad of stars and the glittering lights along the 101 corridor and out on the Oxnard plain were amazing. Along the trail, manzanita blossoms, shooting stars, Ceanothus, and lichens seemed to almost phosphoresce in the diffuse light of the headlamps. From time to time the sweet fragrance of poison oak, just starting to bloom, would waft up from the canyon and mix with the more earthy scents along the trail.

We turned around at the bottom of the Chamberlain Trail, and in a dark-distorted hour were back on the rolling terrain south of Tri Peaks and west of Sandstone Peak. Here the trail follows the drainage of an ephemeral stream. Colder air had collected in the drainage, and the temperature was a chilly 15-20 degrees cooler than the rest of the trail.

Black in the night, massive rock formations towered above the trail, and the hulk of Sandstone Peak appeared huge and insurmountable. At places along the crest there were stunning views of the moon rising over the lights of the Los Angeles basin and at other vantage points equally sensational views of the Conejo Valley.

In 29 days and 50-something miles we would be up here again, climbing the Backbone Trail to Sandstone Peak, winding through the rock formations of Boney Mountain, and then descending the Chamberlain Trail. What an experience that would be!

All sun and moon data is from the U.S. Naval Observatory Astronomical Applications Department. The sunrise time is for Los Angeles and sunset and moonrise times are for Oxnard. There may be small differences in the observed times of sunrise, sunset and moonrise due to a variety of factors.

Sunrise on the first day of the Backbone Ultra — March 30 — will be at 6:43 AM and sunset will be 7:16 PM. At 6:00 AM the orange-appearing star Antares, the Moon, and Saturn will be in the southwest sky, about 27 degrees above the horizon. About 88% of the Moon’s visible disk will be illuminated.

It varies from person to person, but if the sky is clear, there is usually enough light to run on easy terrain for about 30 minutes before sunrise and 30 minutes after sunset. That works out to as much as about 13.5 hours of light for the 6:00 AM start group, 10.75 hours for the 9:00 AM group and 7.75 hours for the noon group.

As on the training run, Sirius, Jupiter, Orion and the Pleiades will be visible early in the evening. Moonrise on the evening of March 30th will be at 11:17 PM. At 2:00 AM the Moon will be about 25 degrees above the horizon in the southeast sky. About 80% of its visible disk will be illuminated. At 4:30 AM the moon is about 35 degrees above the horizon in the southern sky. 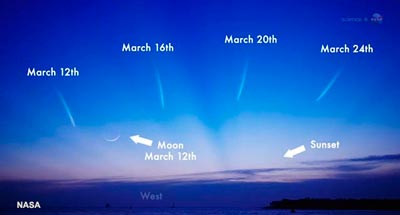 Comet Pan-STARRS probably won’t be visible March 30, but if you happen to be doing an evening training run over the next week or so and have a clear view of the western horizon just after sunset, it may be visible very low on the western horizon. It may be difficult to see in the twilight. For more viewing info check NASA’s Asteroid & Comet Watch and Sky & Telescope’s updates on the comet.