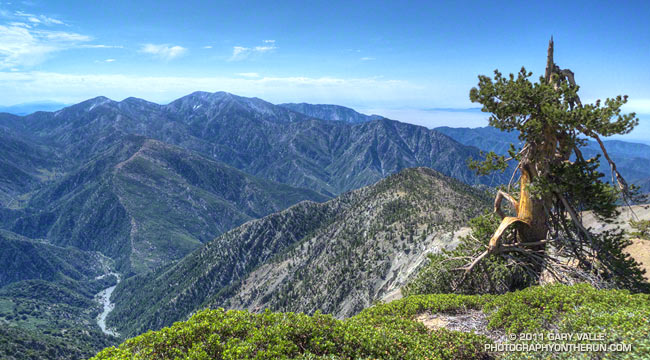 I was at the turnaround point of an out and back run from Islip Saddle (6650′) to Mt. Baden-Powell (9,399′), and had descended a short distance down the south ridge of Baden-Powell to enjoy the ridge top view. It had been a good run so far. It was windier and cooler than expected, but that was a good thing. Temps in the valleys were forecast to top 100 degrees today.

I’d been surprised to find no snow on Baden-Powell. In good snow years, remnants of snow will typically last until at least the 4th of July. There was a patch here and there last year, and sizeable drifts in 2005. This year a little remained on the north face of Mt. Baldy, but that was it.

Even if no snow remained, there was evidence it had been a tough winter. It looked like an unusually severe ice storm had struck the area. Normally resistant to such damage, a stout lodgepole pine had had two of its limbs ripped from its trunk, peeling away a thick layer of bark and cambium. On the other side of the peak, near the Wally Waldron tree, an apparently healthy limber pine had collapsed.

If I had been surprised to find no snow on Baden-Powell, I was even more surprised to find no one on the summit. That wouldn’t last. A number of hikers were working their way toward the peak from Islip Saddle and Dawson Saddle, and I was sure others were on the way up from Vincent Gap.

After visiting the Wally Waldron tree, and chatting briefly with a hiker, I turned eastward on the PCT — next stop Throop Peak!