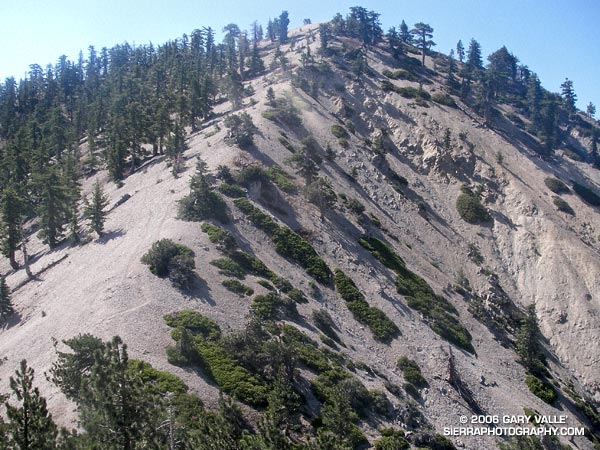 The photograph is of peak 8248, the highest point on Pleasant View Ridge, viewed from the saddle northwest of the peak. Located in the San Gabriel Mountains, Pleasant View Ridge extends northwest about 8 miles from  Mt. Williamson to the vicinity of Indian Bill Canyon.

When hikers refer to Pleasant View Ridge, they are usually talking about a 3 mile segment of the ridge that runs from the southeastern summit of Mt. Williamson (8214′) to Burkhart Saddle (6959′). From Mt. Williamson, the ridge follows along a series of 8000’+ summits, then crosses a deep gap to the broad summit of Pallett Mountain (7760’+). From this point, Burkhart Saddle and the Burkhart Trail are another 0.6 of a mile to the west.  There is no maintained trail on the ridge, but over time a use trail has developed and is generally (but not always) distinct. In this photograph of the ridge from the PCT, Pallett Mountain is the peak on the left, in the distance.

Mt. Williamson is in the peculiar situation that the register for the peak is not on the peak labeled “Mt. Williamson” on the Crystal Lake topo. According to the Sierra Club Hundred Peaks Section Peak List, the register is normally located on peak 8244, which is the next peak along the ridge to the northwest. What is even more peculiar, peak 8248, which is a little further on the ridge, is the highest point of all three!

The section of Pleasant View Ridge between Mt. Williamson and Burkhart Saddle is commonly done as part of a 13 mile loop from Eagles Roost. In order to protect critical habitat of the mountain yellow-legged frog, the Forest Service has closed the PCT between Eagle’s Roost and the Burkhart Trail. In addition, Angeles Crest Highway (SR2) is now closed 0.25 mile west of Eagles Roost. (Update May 27, 2007. Angeles Crest Highway has since been re-opened to Islip Saddle. It was open to Islip Saddle on May 27, 2007, but closed beyond this point. It looked like the road past Islip was being resurfaced.) If the PCT detour suggested by the Forest Service is followed, the loop length is increased to about 14.4 miles, and it is necessary to hike/run a 2.4 mile stretch of Angeles Crest Highway. Done this way, the route has an elevation gain and loss of 4000′ or so.

I usually like to do the loop in the counter-clockwise direction, and that’s what I did on this day. It’s nice to get a big chunk of elevation gain done in the morning while it’s cool, and then have a net elevation loss doing the ridge. Also, except for a few downed trees, the running is outstanding from Burkhart Saddle down to Little Rock Creek. Some Western Columbine (Aquilegia formosa) was blooming along Little Rock Creek.

For more information regarding the PCT detour see the News section of the Angeles National Forest web site.