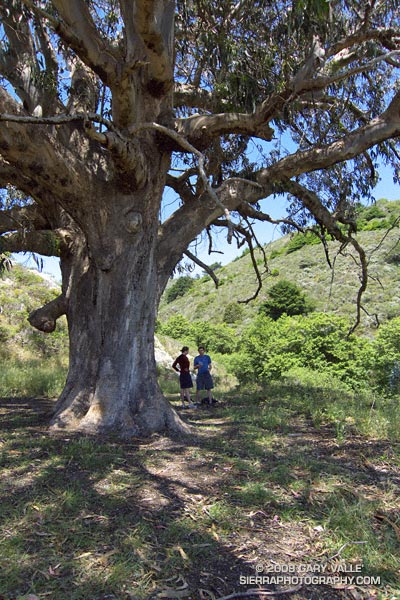 Like an Ent, of Tolkien’s Middle Earth, the huge tree hummed softly. We were on the Coast Trail in Point Reyes National Seashore, near Kelham Beach, about halfway into a 14.5 mile hike/run. We’d paused under the sprawling limbs of the Tasmanian blue gum to enjoy its shade and eat a quick snack.

Rather than the singing of an Ent,  the resonating buzz was from the wing-beats of many thousands of bees, foraging in the tree. But, it was certainly the kind of day an Ent would relish. Instead of fog and chill gales, the day was warm, with just enough of a breeze to tickle a leaf. Below the bluff, a lazy ocean lapped at the shore, barely mustering enough strength to generate an occasional wave.

Awed by the size of the tree, Brett, Amanda and I joined hands to create a crude measuring tape, but our combined reach only encircled about half of the trunk. We estimated its girth at chest height to be about 30 ft! An oak tree this size would be ancient — perhaps several hundred to a 1000 years old. But, eucalyptus followed the Gold Rush into California, and the tree could be no older than about 150 years!

It was comfortable in the shade of the tree, and we were not in a rush to get back on the trail. Near record high temperatures had been forecast, and the expected 70-80 degree temps along the coast and 90-100 degree temps inland seemed about right.

Now we had to get that elevation back. Nearby a hummingbird dashed and darted among the peach colored monnkeyflowers, and lodged a territorial complaint as we returned to his trail. In a couple of minutes we turned sharply left onto the Sky Trail and began the steep climb back up the hill.

Here’s a NPS map of Pt. Reyes (PDF) and Cesium browser View of a GPS trace of our route.

Tomorrow, a loop through the Presidio and under the Golden Gate Bridge.