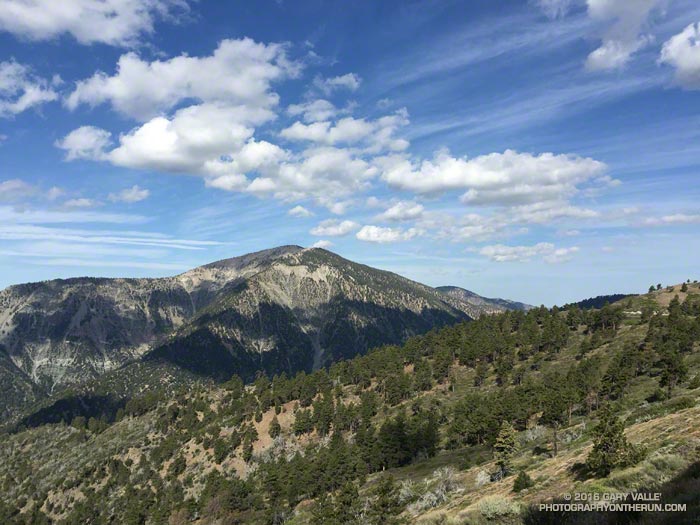 In recent weeks it seems just about every weekend the mountains have had postcard running weather.

Today’s run was on a higher elevation section of the Pacific Crest Trail and Angeles Crest 100 course. To shorten the shuttle, but still enjoy the great views up on Blue Ridge, we parked at Inspiration Point and started the day with a six mile (round trip) out and back run to near Blue Ridge Campground.

After the out and back run and a quick stop at the car, we continued west on the northbound PCT to Vincent Gap, then up to the summit of Mt. Baden-Powell, down to Islip Saddle, up and over the shoulder of Mt. Williamson and then down to Eagles Roost.

PCTA volunteer Ray Drasher has been hard at work again, clearing fallen trees from the trail on Blue Ridge, Lytle Ridge and between Mt. Hawkins and Islip Saddle; and PCTA trail maintenance sage Pete Fish and another volunteer took care of the two trees on the west side of Williamson. Thanks!

The title photo is Mt. Baden-Powell from the PCT east of Inspiration Point.