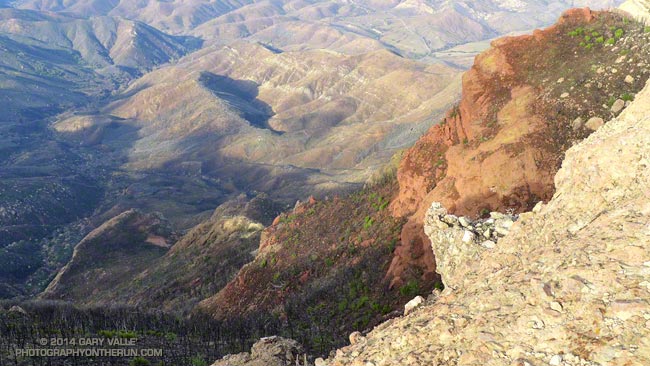 The photo above was taken from the edge of the western escarpment of the Boney Mountain massif in the western Santa Monica Mountains. The western side of the mountain is a huge bowl that funnels runoff into Blue Canyon. Blue Canyon can be seen on the left side of the photograph. It is a tributary of Big Sycamore Canyon. More than 60% of the Blue Canyon drainage was burned in the May 2013 Springs Fire.

In the early morning hours of Friday, December 12, 2014, a very strong cold front, enhanced with moisture from an atmospheric river, produced a line of strong storms that produced rain rates in the Springs Fire burn area as high as 2 inches per hour. This resulted in widespread flash floods and debris flows in the burn area, much of which is in Pt. Mugu State Park. Mud and debris flows originating from the burn area inundated homes below Conejo Mountain and closed Pacific Coast Highway.

This slideshow includes photos of the aftermath of the flash floods and debris flows in Blue Canyon, Sycamore Canyon and Upper Sycamore. These were taken on a trail run on December 14, 2014. Also included are some NWS Los Angeles/Oxnard tweets and some additional meteorological images and info.