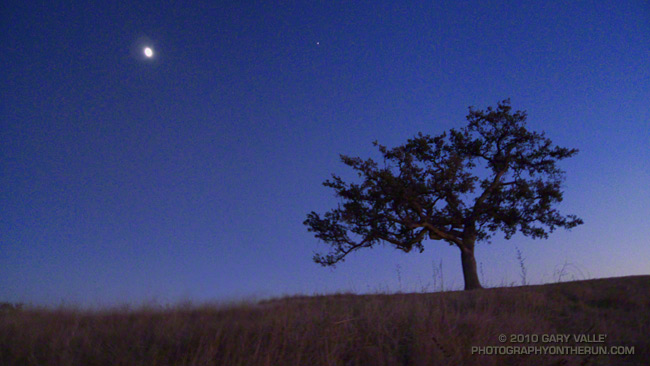 For an eighty degree day, it had been surprisingly cold in Las Virgenes Canyon. The canyon’s east-facing slopes had been in shadow for much of the afternoon, and had lost any residual warmth to a crystal clear sky. The refrigerated air had spilled from the hillsides, collected in low points, and flowed in a frigid stream down the canyon.

In running shorts and a t-shirt, the cold air had been invigorating, but in the fading light I was glad to be out of the canyon, and running up the Beast toward Lasky Mesa.

The sun had set about 30 minutes before. Unmarked by clouds or contrails, the colors of the western sky were remarkably pure, ranging from the warm yellow-orange of a fleeting day to the cold steel blue of approaching night.

The sweet licorice scent of fennel swept past on a warm current of air. Along the trail crickets called, buoyant and hopeful; and a covey of quail chattered anxiously, debating flight. Above, the moon and Jupiter shone brightly, already beginning to illuminate the landscape.

On a hill to my right a solitary coyote yipped, and a nearby hillside answered in an excited sing-song of yips, yaps and yowls. Moments later another band answered the first, and then faraway a third.

Early in the run I had pushed the pace hoping to beat the sun back to car. Somewhere on the north boundary ridge it had become clear that I would lose the race with the sun. But I also realized it would not be a problem. There was no rush. I could catch the moon.