The creek burbled a gentle song of Spring, and downstream a Canyon Wren replied. Standing near the bottom of the narrow gorge, my eyes followed the soaring trunks of a grove of alders to their canopy of new leaves — backlit and bright green in the sun.

Bright green in the sun… In my run-altered state it was one of those aha! moments. The alders are just tall enough to reach from the shadows of the canyon into the sun – and – without the water in the stream that cut the canyon, the alders could not grow to the necessary height. The pieces fit — or was it the endorphins talking?

We were in Bear Canyon, west of Mt. Wilson, about 10 miles and 15 stream crossings into a 20 mile loop. An  idyllic hike along Arroyo Seco a couple of weeks before had reminded me of this wonderfully wild trail.

Our adventure had started at Red Box, on Angeles Crest Highway. Working east down the Gabrielino Trail to the West Fork San Gabriel River, snow could be seen glistening in the morning sun on Mt. Baldy’s summit slopes. There was no snow on our trail, just warm sun, buzzing bees and blooming manzanita. Continuing down the forested river canyon, we followed the Gabrielino Trail to Valley Forge, and then ascended the winding Valley Forge Trail to Eaton Saddle on the Mt. Wilson Road.

At the Mt. Lowe fire road gate at Eaton Saddle we were greeted by yellow warning tape and an “Unsafe for Travel” sign. What had happened? Did Mueller Tunnel collapse or something? Not inclined to turn back, we continued along the road, promising ourselves that we wouldn’t do anything reckless. 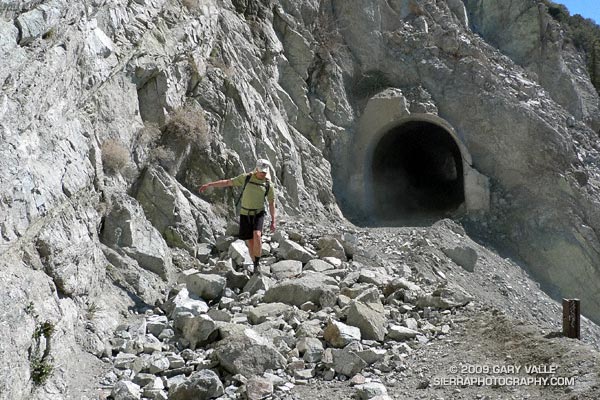 Other than the tracks of heavy equipment, nothing seemed out of the ordinary as we approached the tunnel. I had forgotten that the tunnel is curved, and for a moment was concerned when I couldn’t see the exit. But a couple of strides later the arched exit burst into view. The danger was an old one — an ongoing rock slide just beyond the western exit of the tunnel. There must have been a big slide recently. At the moment it was passable, and we figured as long as we didn’t stop under the slide, we’d probably be OK.

From Markham Saddle we followed the Mt. Lowe fire road out Mt Lowe’s elongated west ridge to a single track trail that leads down to Tom Sloan Saddle. From here, the Bear Canyon Trail descends into Bear Canyon following the route of the old Tom Sloan Trail.

Down in the canyon, I was glad to see that the neo-orange plastic tape that had marked the trail in 2007 was now tattered and faded, and not easily seen. Part of the enjoyment of a remote trail is its wildness. The trail descends the canyon — it has nowhere else to go. When progress is blocked on one side of the stream, it crosses to the other side. Plastic tape isn’t needed to show the way. 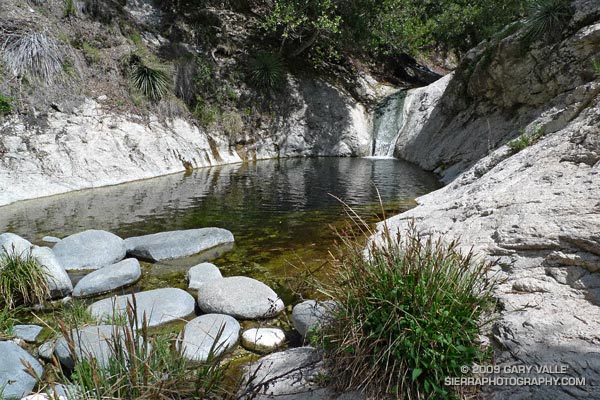 After many such stream crossings, we eventually worked our way down to the confluence of Bear Creek and Arroyo Seco. Along this reach there is a fantastic series of falls, pools and cascades. Gary Gunder and I were blown away by these drops when we kayaked Arroyo Seco down to JPL in 1998.

Following the Bear Creek trail upstream, we were careful not to miss the turn where the trail climbs steeply to the Gabrielino Trail and traverses above Switzer Falls. At Switzers Picnic area we parted ways — Miklos and Krisztina headed back to their car at Clear Creek, and I continued up Arroyo Seco to Red Box. It was a incredibly scenic and enjoyable trail run.

Here’s a Google Earth image and live Cesium ion view of a GPS trace of the Red Box – Bear Canyon – Switzers Loop. According to SportTracks the length of the loop was 19.5 miles with an elevation gain/loss of around 4000 ft.