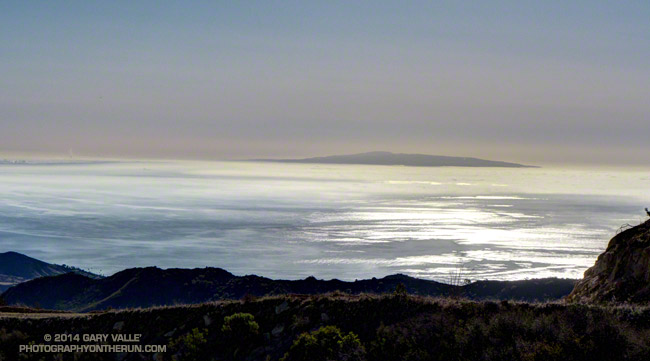 The tinge of frost on the rusty M*A*S*H ambulance wasn’t so much of a surprise, but that there was not even a breath of wind at the M*A*S*H site was astonishing.

Overnight unrelenting winds had rushed and roared through the palm trees above the house and I’d steeled myself for what would surely be a difficult run.

But when I arrived at the Cistern trailhead on Mulholland Drive there was almost no wind. A layer of cold air trapped against the crest of the Santa Monica Mountains in the Malibu Creek drainage was shielding the area from the wind. At least for a while.

When I’d left the house in the West Valley the temperature had been a balmy 64 degrees. As I turned onto Mulholland Highway from Malibu Canyon Road my car’s thermometer had read 32 degrees and at the trailhead it had been 46 degrees. Along Malibu Creek at the M*A*S*H site I’d guess the temperature was in the mid-thirties.

Incredibly, the climb up Bulldog Motorway was one of the most pleasant I’ve done. Near freezing temperatures gave way to warming Winter sunshine, and as I worked up the grade I wondered how long the respite from the wind would last. To the northeast I could see the telltale dusty haze from strong offshore winds in the San Fernando Valley. At some point those winds would scour out the protective layer of cold air or I would climb above it.

It wasn’t until about halfway up the Bulldog climb that the wind started to pick up. But it was still far less windy than I had expected. Several sections of Castro Peak and Mesa Peak fire roads were in the lee of the crest, and the running was excellent. The variegated patterns of sun, stratus and wind on the Pacific was spectacular.

Once I was off the crest the wind diminished to little more than a zephyr. In many areas — such as at Tapia Park and along Crags Road there was no wind at all.

But it was still windy in the West Valley. When I got home from the run I checked the Cheeseboro RAWS, which is about 6 miles NNE of Malibu Creek State Park. Between 9:30 and 10:30, when it had been dead still on Crags Road, the Cheeseboro RAWS had recorded steady winds of 30 mph, gusting to as high as 50 mph!

The title photo is of windblown stratus on Santa Monica Bay with Palos Verdes Peninsula in the distance.