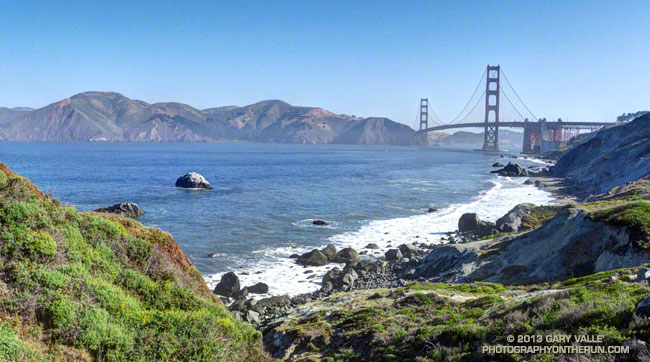 The Presidio of San Francisco is a favorite of local and visiting runners. One of innumerable route variations, this 7.5 mile run is jam-packed with iconic sights and memorable points of interest.

Brett and I started the run near the Chestnut gate of the Presidio. The first stop was the Letterman Digital Arts Center, the headquarters of Industrial Light and Magic and LucasArts. You can grab a cup of coffee at the Starbucks here, and then stop by the Yoda Fountain. Statues of motion picture pioneer Eadweard Muybridge and TV pioneer Philo T. Farnsworth are also on the grounds. 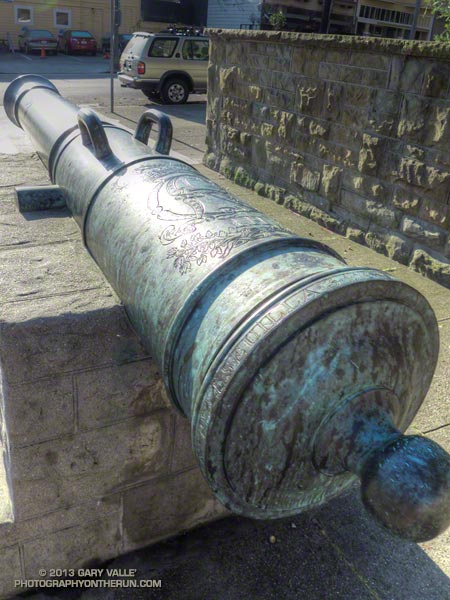 Circling around to the Letterman complex entrance we returned to the Presidio gate at Lyon & Lombard, which is flanked by two 18th century bronze Spanish cannon. The 6-inch caliber (24-pounder) cannon are marked with the ornate cipher of King Carlos III.  The information imprinted on the breech ring indicates they were cast two days apart in Seville in December 1783. Even older Spanish cannon can be found at the Officers Club and elsewhere in the Presidio.

Turning right (south) we ran a few blocks up Lyon Street to the popular Lyon Street steps. There are two groups of steps, the first set being steeper than the second. One of San Francisco’s most exclusive neighborhoods, Pacific Heights, borders the steps.

If you check online you’ll see counts of the Lyon Street steps ranging from around 241 to 291. Brett & Amanda counted the steps by section on another occasion and counted 63, 62, 46, 60, and 60 steps — for a total of 291 steps. The curb in the middle near the basketball hoop was not counted.

In about a half-mile we picked up the Bay Area Ridge Trail near the Arguello Gate and the Presidio Golf Course Clubhouse. Although not included on our route today, Inspiration Point is nearby and can be visited using the upper Ecology Trail.

Following the Bay Area Ridge Trail we crossed Arguello Blvd and continued uphill a short distance to Andy Goldsworthy’s Spire. Today Spire pointed into a clear blue sky, but on other days it can be nearly lost in fog. Over time, the young cypress and pine trees surrounding Spire will grow to dominate the skyline and Spire will shrink until it becomes a lost thought from another time.

About a half-mile beyond Spire the northwest-trending Bay Area Ridge Trail turned west, near the connector trail to the National Cemetery Overlook. Following the trail we continued west, past Rob Hill Campground to Washington Blvd. and then joined the Coastal Trail at the Pacific Overlook.

Here the iconic views of the Pacific shoreline and the Golden Gate begin. Taking advantage of the superlative weather, we ran down the Batteries to Bluffs Trail toward Marshall’s Beach and south to Battery Crosby, looping back up to the Coastal Trail and the Pacific Overlook.

Not that much bigger than a large container ship, Alcatraz looked like a huge tramp freighter out in the bay, steaming through the morning haze. Already late for breakfast, we tried to keep the pace up as we ran along the Promenade. At Crissy Field I paused for a moment to photograph Huru, one of Mark di Suvero’s huge steel sculptures.

Leaving the shoreline at the marina, we crossed Marina Blvd. One more stop was on our itinerary — the Palace of Fine Arts. Built for the Panama Pacific International Exposition in 1915, and rebuilt in 1965-66, architect Bernard Maybeck’s vision was that of “a Roman ruin, mutilated and overgrown.”

Out of time, I took a few photos and we checked on the nest of the swans Blanche and Blue Boy, residents of the Palace’s lagoon. One swan was on the water, but the nest was empty. Later we learned that four cygnets had hatched just days before.

Here’s a slideshow of some photos from the run. This interactive Cesium browser View shows the GPS track of our route. Here also is a Park Service & Presidio Trust map of the Presidio (PDF).