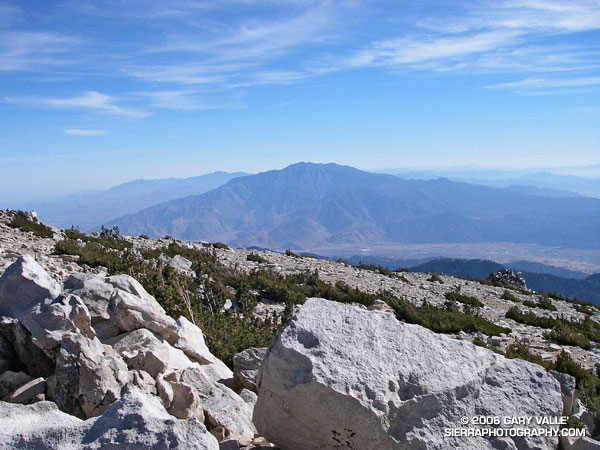 One of the other climbers commented, “It’s almost eerie.” And it was. On the 11,499′ of San Gorgonio Mountain there was not a breath of wind and the temperature was a comfortable 50-something degrees. Wisps of cirrus accentuated the azure sky, and to the southeast San Gorgonio’s ever-present companion, Mt. San Jacinto, stood quietly above Banning Pass. 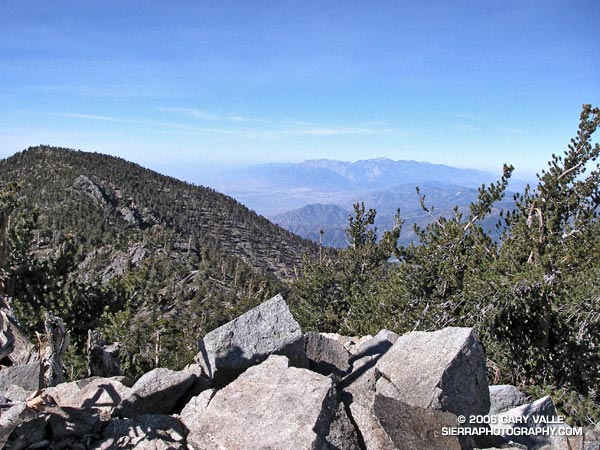 A couple of hours before I had been sitting on the summit of East San Bernardino Peak, debating whether to continue my planned trek to San Gorgonio. I was considering running over to San Bernardino Peak instead, and then calling it a day. For sure I couldn’t do both. I didn’t have enough water, and the only nearby water source might be dry.

A month old report from the Water Collector had noted water “barely trickling” out of the pipe at Trailfork Springs. I wasn’t familiar with the spring, and given the pessimistic report probably wouldn’t do the required detour to check it out. So whatever I did, my remaining water would have to do. If I didn’t push too hard, it would get me to San Gorgonio, but probably not over to San Bernardino Peak and then to Gorgonio. (Note: A better late season water source is High Meadow Springs. The springs and camp site is about 1/3 of mile below the Divide Trail, east of Shields Flat. The turn off to the spring is between high point 10500 and Red Rock Flat. On a run of this course in late October 2009 the spring had a good flow.)

The hike up from Momyer had been unrelenting – a gain of 5250′ in elevation over about 7.5 miles. It was kind of like going up the Palm Spring Tram, without the tram. Beyond the turn-off to Alger Camp the character of the trail changed from obvious and well-trodden, to a schizophrenic path that in places was the kind of trail that only the really adventurous enjoy.

There were numerous downed trees, stark evidence of the bark beetle infestation. Although most could be bypassed or clambered over, one recently downed tree required a face in the dirt belly crawl. In other areas the manzanita, chinquapin, and whitethorn were so thick that the trail, though nearly invisible, could not be lost. Upward progress was possible by only one route. 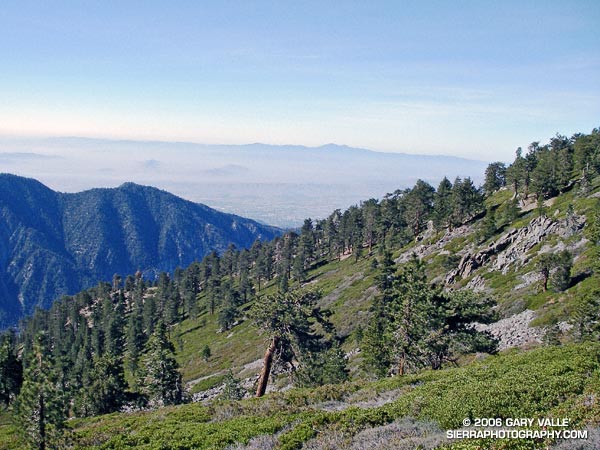 In counterpoint to these inconveniences were the early morning views of Mill Creek Canyon, idyllic sections of forested trail, Clark’s Nutcrackers and gnarled Lodgepole pines on the high mountain slopes, and outstanding views of Saddleback and Mt. San Jacinto. Near one fallen tree an opportunistic red paintbrush bloomed as if it were Summer. It is better to be positive…

Back on East San Bernardino Peak, I needed to make a decision – San Bernardino Peak or San Gorgonio? Instead I wandered about the peaklets in the area, not really heading in the direction of either peak, but evaluating how I felt and thinking through scenarios… Feel OK… Full moon tonight… Enough water to get to the peak… Water at Vivian Creek… Weather great… Know the route… After a few minutes, I found myself bearing slowly to the east, picking up the Divide Trail and starting to run. 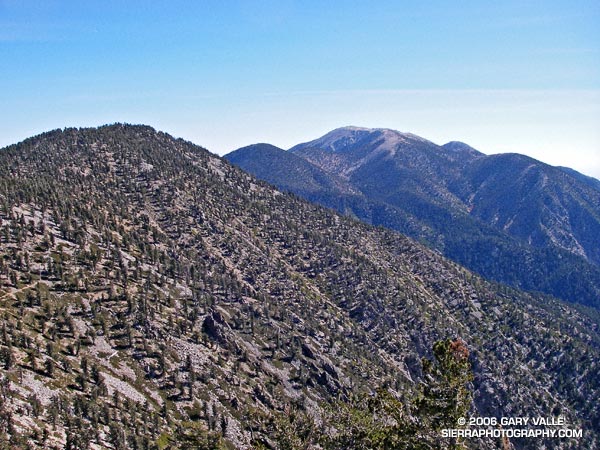 The distance by trail from East San Bernardino Peak to Mt. San Gorgonio is about 8 miles. Virtually all of route is above 10,000′ and along a spectacular mountain divide. The running on this high line is unmatched in Southern California. Once on the Divide Trail and headed in the direction of San Gorgonio there was no thought of turning back. Perhaps the biggest difficulty was resisting the ascent of the many named peaks along the way. Without more water, most of these would have to wait until a another day.

The distance to the summit of Gorgonio from Momyer via East San Bernardino Peak is about 15.5 miles, and the total length of the loop is about 26 miles. About 11 miles of the route is above 10,000′ and the total elevation gain and loss is on the order of 7000′. If you include Alto Diablo, there are nine named peaks above 10,000′ along the route. Dobbs Peak is somewhat further from the trail than the others, but rounds out the total to ten. Here is a Google Earth image and Google Earth KMZ file of a GPS trace of the loop.

Note: Mill Creek can be difficult and dangerous to cross.