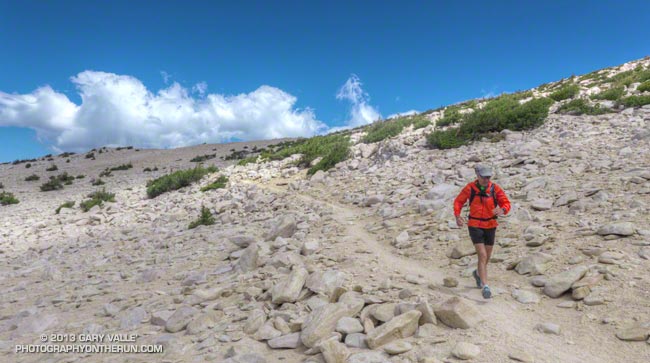 As we rounded the shoulder of Jepson Peak the pyramidal form of San Jacinto Peak came into view. A strong southerly flow was pushing a layer of cumulus clouds up the Coachella Valley, into Banning Pass, and toward San Gorgonio Mountain. Above, a higher layer of clouds was beginning to coalesce.

Moisture from the remnants of Tropical Storm Ivo was being drawn into the monsoonal flow, and if the weather models had it right the increasingly strong flow would result in an increasing chance of thunderstorms over the next few days. Even today the NWS Zone Forecast indicated a slight chance of a showers and thunderstorms:

SAN BERNARDINO COUNTY MOUNTAINS-
330 AM PDT SAT AUG 24 2013
…FLASH FLOOD WATCH IN EFFECT FROM SUNDAY MORNING THROUGH MONDAY
EVENING…
.TODAY…MOSTLY SUNNY IN THE MORNING…THEN PARTLY CLOUDY WITH A
SLIGHT CHANCE OF SHOWERS AND THUNDERSTORMS IN THE AFTERNOON.
WARMER. HIGHS 76 TO 86 ABOVE 6000 FEET TO 88 TO 98 BELOW
6000 FEET. SNOW LEVEL ABOVE 8000 FEET. AREAS OF WINDS SOUTH
15 MPH. GUSTS TO 25 MPH IN THE AFTERNOON. CHANCE OF MEASURABLE
PRECIPITATION 20 PERCENT.

We had left South Fork trailhead a few minutes late, but were making good time. Including stops for photos and a wilderness permit check it had taken us about 2 1/4 hours to reach Dollar Lake Saddle. A quick calculation put us on the summit of Gorgonio around 11:00-11:15. Based on what I was seeing over and around the mountain I thought that we would probably get to summit before weather became an issue. The key word was “probably.” Experience has taught that computer weather models don’t always get it right, and mountain weather often seems to have a mind of its own.

Craig and I were doing the reverse a route I’d done three weeks before. This time at South Fork Meadows we’d turned right at the fork and gone up the Dollar Lake Trail to Dollar Lake Saddle. I was curious to see if the counter-clockwise version of the loop was a better trail run than the clockwise loop.

On the way up to Dollar Lake Saddle we’d stopped to take a closer look at a tall pine I’d noticed on my last run here. It had been struck by lightning. Judging from the width of the scar and its ragged, pitch-covered margins, the stroke had been a strong one and had occurred within the last couple of years. Based on the tree’s elevation (about 8400′), the size of the cones, and the shape of the prickles on the cones, the tree was a Jeffrey pine.

Now we were on the San Bernardino Divide Trail, about 1 1/2 miles beyond Dollar Lake Saddle and about 2 miles from the summit. After doing the peak we would descend via the Sky High and Dry Lake Trails to South Fork Meadows, where we’d refill our hydration packs and continue down the South Fork Trail to the trailhead. We’d be descending directly to Dry Lake, rather than taking the route via Fish Creek Saddle and Lodgepole Spring.

It was chilly! For the first time in several weeks of mountain running I pulled on my sleeves. There was a different feeling about the mountain today. A fitful wind streamed through the branches of the lodgepole and limber pines, its flow noisy and turbulent, and its speed and direction unsettled.

As we worked toward the summit, it was evident the top of the cumulus cloud layer was rising and the clouds in all layers were starting to show more development. On top, I was surprised to see how far the cumulus had pushed up Whitewater Canyon. Everyone on the summit was in good spirits — some more so than others. Now that we were on top we could talk about how spectacular the weather was, rather than how threatening.

The run down from the peak on the Sky High Trail was absolutely superb — and far less rocky than running down to Dollar Lake Saddle on the Divide Trail. At about 10,600′, and a couple of switchbacks above the C-47 crash memorial, we were suddenly surrounded by clouds. This was a treat for us — we were headed down — but for the people headed up the peak it posed a quandry that has faced mountaineers for millennia: Continue up, or go down?

This time, as this Aqua/MODIS satellite image from 2:15 pm shows, San Gorgonio Mountain was on the margin of the monsoon flow. Although there was a lot of cumulus around and over the mountain, most of the major thunderstorm development was to the east and southeast of the peak. The closest automated weather station I could find with measurable rainfall was the Burns Canyon RAWS, 13 miles to the northeast. It recorded 0.17 inch between 2:00 pm and 4:00 pm. The Yucca Valley RAWS, 22 miles away, recorded 0.18 inch between 1:00 pm and 2:00 pm. In the big storms to the southeast, Fish Creek Mountain recorded nearly one inch in one hour.

So which direction of the loop was the better trail run? I’d have to give the edge to the counterclockwise loop — up the Dollar Lake and Divide Trails and down the Sky High and Dry Lake Trails. There is still a lot of very rocky, technical trail — particularly on the Dry Lake Trail, but the outstanding running on the Sky High Trail between 11,400′ and 10,000′ more than makes up for it!