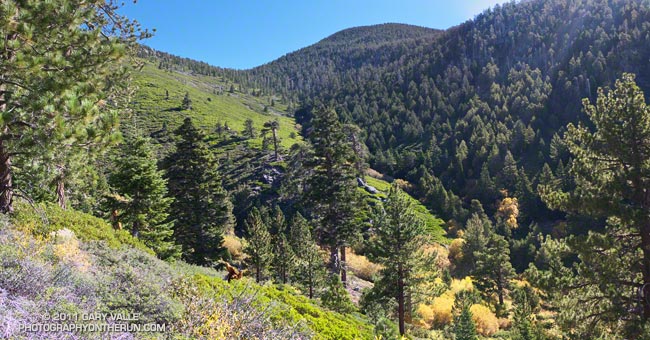 I don’t say this very often, but it was great to be running on pavement — smooth, even, consistent pavement. All I had to do was put one foot in front of the other and chug on down the blacktop.

I was running down Valley of the Falls Drive from the Vivian Creek trailhead to the Momyer Creek trailhead after ascending San Gorgonio Mountain (11,499′). San Gorgonio is the highest peak in Southern California, the nearest higher peaks being Charleston Peak (11,916′) west of Las Vegas, and Olancha Peak (12,123′) in the Sierra Nevada.

The Momyer Creek and Vivian Creek trailheads are in Mill Creek Canyon, near Forest Falls, on the south side of San Gorgonio Mountain. It only takes me a few minutes longer to drive to the Momyer Trailhead than to drive to Islip Saddle in the San Gabriels, or the Chula Vista trailhead on Mt. Pinos. Momyer is another great option for a scenic, challenging, higher altitude trail run that’s relatively close to home.

There are two routes I like to do on the Forest Falls side of the mountain — the High Line and the Falls Creek loops. Both start/end at Momyer and descend via the Vivian Creek Trail.

Today I’d done the Falls Creek route. This adventurous run features 24 miles of mostly technical trail that gains and loses about 6600′ and tops out at 11,499′. It’s comparable in effort and time to a tough SoCal style 50K. The High Line route is even more of a challenge.

The day had been one of those perfect, cloudless, crystalline days you get in the Autumn, with hundred mile visibility, empyrean blue skies, rich yellow leaves, and long cold shadows.

Following last Winter’s good snowfall and runoff, and the unseasonably strong storm earlier this month, springs and streams were flowing well. On the way I stopped for water at Plummer Meadows, and on the way down at High Creek. Even though I’ve been doing adventures in the mountains for decades, it’s still a little surprising how much water is needed on a higher altitude run, especially when the humidity is low.

Recently someone asked me what kind of water filter I use with a hydration pack. I’ve used three approaches for water treatment when the water source is a “good” one and treatment is a precaution.

– UV light pen. SteriPen appears to be the most widely used outdoor UV water purifying pen, and several versions are available. I’m currently using the Steripen Adventurer.
– Inline filter. Before UV pens were widely available and accepted I would occasionally use an inline filter. When dry, the filter was lightweight, however its flow rate was barely adequate. The brand I used to use is no longer available, but the Sawyer 3 Way Water Filter looks similar. Specs say it weighs 1.8 oz.
– No treatment. This is the lightest and fastest option, but having watched a climbing friend fight giardia for a year and lose a shocking amount of weight and strength, I can’t recommend it.

In the Wikipedia overview of portable water purification a writer comments that “studies have shown that UV doses at the levels provided by common portable UV units are effective at killing Giardia and that there was no evidence of repair and reactivation of the cysts.”

The range of temperatures on today’s run was extraordinary. It was cool on the summit — in the low forties — but the coldest temperature was on the shaded slopes below Dollar Lake Saddle (10,000′). Here the temperature had been a chilly thirty-something. Down in Mill Creek Canyon at the end of the run the temperature felt like it was in the mid-eighties. The Mill Creek RAWS, near the ranger station, recorded a temperature of 92 degrees  in the mid afternoon with a relative humidity of only 12%.

One of the highlights of today’s run is that there were still patches of snow above 10,000′ from the storm on October 5th! One big patch at 11,000′ was beginning to become sun-cupped. I don’t think I’ve seen sun-cupped new snow in Autumn before!

The title photograph is from the Falls Creek Trail near Plummer Meadows. Dollar Lake Saddle and Charlton Peak loom above.