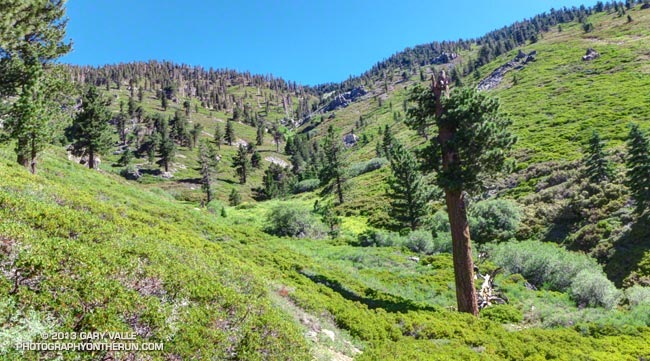 Sitting on the summit of Gorgonio I shook hands with Cole and said “Hi” to his friends. They had run up Gorgonio from the Fish Creek trailhead and we were comparing notes. He’d asked how far I’d run from Momyer. I told him “about 13” and commented that I was surprised by the amount of water in the creeks. He commented, “There’s no water on the way up from Fish Creek.” I looked down, and in his pack was a gallon jug of water. One gallon of water weighs 8.3 pounds, but put it in your pack and it feels like a hundred!

Other than a Southern Pacific rattlesnake encounter and a finicky UV pen the ascent from Momyer had gone well. Alger Creek had enough water I had to pick my way across the creek, and the small streams below Saxton Camp and at Plummer Meadows had more than adequate water for filtering. The creeks were lined with with ferns and flowers and there was little hint of the past year’s meager snowpack and rainfall.

One reason might be that the on-again, off-again summer monsoon had been on much of the latter part of July. This resulted in 0.04 inch of rainfall in Downtown Los Angeles July 26 — enough for a record — and rainfall totals of over two inches in some mountain areas. The Fawnskin RAWS, at Big Bear Lake recorded 1.3 inches of rain over the period July 20-26.

The encounter with the rattlesnake had been dicey. After an hour of steep climbing on the Momyer Trail I’d turned east onto the Alger Creek Trail and was running at about 7200′ on a more or less level stretch of trail in an area of gray rocks. Earlier the possibility of a rattlesnake had flitted through my mind, but I’d become lost in a reverie of early morning sun, tall pines, cool temperatures and easy terrain.

The dark gray Southern Pacific rattlesnake might as well have been invisible. As I began an elongated stride over a large gray rock, something moved just beyond the rock. My brain registered “SNAKE!” and then a microsecond later “RATTLESNAKE!!” Adrenalin turned my already elongated stride into an awkward leap that carried me just over the moving reptile.

The snake had been sunning itself on the trail and was as startled as I was. In a panicked movement it wriggled onto a flat rock on the side of the trail and stopped. My momentum had carried me a few feet past the snake and I turned as quickly as I could to try and get a photo. Rattlesnake for sure — heavier body, triangular head with BIG venom glands. When I took a couple of steps toward the snake to get a shot, it said “no way” and slithered into an opening in the talus.

The title photo was taken at Plummer Meadows. The spot is a favorite, and the water source has never failed me. It looked no different today than in any other year. Although the stream is small, the flow was good. The area along the stream was lush and green and decorated with yellow sneezeweed, white ranger’s buttons and magenta fireweed. Tracing the path of the stream up the drainage, it lead to High Meadow Springs; about 1000′ higher and just below the divide.

The pine in the foreground of the photo is interesting. The upper part of its trunk was snapped off some years ago, probably by an avalanche in a very big snowpack year. Given the age of the tree, the big winter of 1968-69 (44 years ago) seems like the most likely candidate.

According to the California DWR report “California High Water 1968-69” during the period January 18-27, 1969, Lake Arrowhead recorded 25.66 inches of precipitation. Given the south-facing aspect and the 9000′-10,500′ altitude of the Plummer Meadows drainage, 30-40+ inches precipitation — much of it in the form of snow — is a possibility. The DWR report indicates that Mt. Baldy (village) recorded 41.6 inches of precipitation during the period January 24-27, 1969! Additional heavy precipitation was recorded in February. This could have translated to 25 feet or more of snow.

From Plummer Meadows the trail climbs about 1000′ over 1.5 miles to Dollar Lake Saddle. Much of the climb is on a well-shaded, northwest-facing slope that can be quite cool. There is a stand of limber pines along this section of trail.

The stretch from Dollar Lake Saddle to the summit is outstanding with far ranging views along and to either side of the divide. I had expected to see a pall of smoke from the Silver Fire and while the visibility wasn’t perfect, it could have been much worse. Including stops for photos and a wilderness permit check it took about an hour and a half to get to the summit from Dollar Lake Saddle. This is about normal for me and I was glad to still have some legs after doing the peak from South Fork the previous week.

How do the three trail runs I’ve done on San Gorgonio compare? Outside of the Sierra, I don’t think there is a better mountain run in Southern California that can be done as day trip than the Falls Creek Loop. The South Fork Dry Lake – Dollar Lake loop is also excellent, but the downhill running on the Dollar Lake Trail isn’t quite as good as on the Vivian Creek Trail. The Highline/Divide loop is the most adventurous and includes the most running above 10,000′, but sections of the trail below the divide are usually overgrown and you have to go off the Divide Trail to get water.