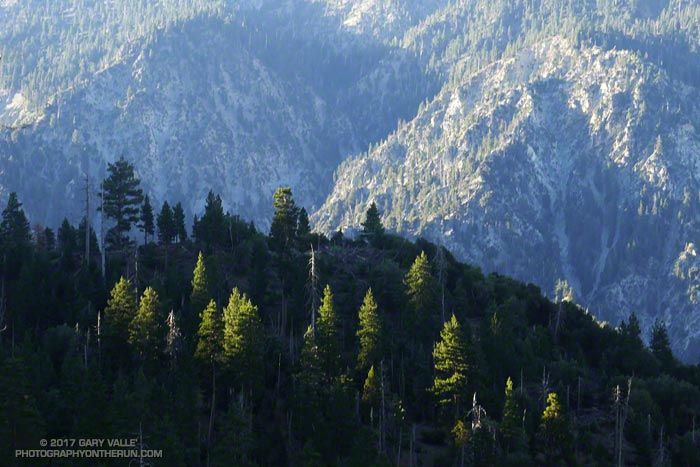 I was lost in thought and working up one of less-used trails that ascends San Gorgonio Mountain — the Falls Creek Trail. For every 100 people that do the mountain from the Vivian Creek and South Fork trailheads, I’d guess one or two ascend it by the Momyer – Alger Creek – Falls Creek – Divide Trail route.

I was thinking about many things — a rattlesnake I’d almost stepped on here; the old Falls Creek trail that ascended directly from the valley; whether it would be cloudy on the summit; what wildflowers I might see; and a multitude of other thoughts. I was also thinking about tracks.

It’s a habit of mine to check the tracks on a trail. In addition to identifying the animal tracks, it’s fun to try and guess who might be on the trail ahead. Is it one person or a group? If it’s a group, how many? How long ago were the tracks made? Most of the shoe tracks on the trail today were old, but I kept getting a glimpse of one track that looked like it could have been from the previous afternoon or early this morning. My impression was that it was a solo hiker.

I had not caught the “hiker” by Alger Camp, so either the mystery person was fast and still on the trail ahead, or they had left Alger Camp early, or they had hiked in the day before and had camped farther up the trail. Or maybe there wasn’t a mystery hiker.

There is some very good running between Alger Camp and the Falls Creek drainage. Captivated by the running and my surroundings, I’d pretty much forgotten about the mystery hiker. I’d passed the turnoff to Dobb’s Camp about 45 minutes before and was working up toward Plummer Meadows when a person suddenly emerged from the trees 25 yards to my right, and rushed toward me, shouting, “Sir… sir!” There was such urgency in their quest I was startled, and it took me a moment to realize the individual was a Forest Ranger.

The Ranger said something like, “I assume you have a wilderness permit?”

I assured the Ranger I did, and pulled off my pack.

“Where are you headed?”

I responded, “The peak.”

The Ranger then asked if I was coming back the same way. I explained that after doing Gorgonio, I would be running down the Vivian Creek Trail and then down the road to the Momyer trailhead. Scrutinizing my day use permit, the Ranger asked a few more questions, and then thanked me and sent me on my way.

I was a little later getting to Gorgonio’s summit than the previous Saturday, and it was a busy place. Where last week there had been one person on the summit, this week there were around a dozen. Summits are generally happy places and the conversation can be about just about anything. Today the main topics were Lumix cameras and hummingbirds.

By the time I was headed down there was a fairly extensive deck of clouds over the mountain. But today the clouds didn’t have the convective instability and vertical development of the previous week. There would be no showers or thunder; the clouds would just keep the temperature comfortably cool.

In some ways the run down the Vivian Creek Trail is more demanding than the climb up from Momyer. The legs have some miles on them and the trail is very rocky. Last Saturday I hadn’t used poles doing the Dollar Lake – Dry Lake loop from South Fork. This week I did use them on the way up, and I think my legs felt better on the descent as a result.

The most dangerous part of the loop might be the mile and a half run from the Vivian Creek Trailhead to the Momyer Trailhead on Valley of the Falls Drive. In some stretches there’s not much of a shoulder and the road’s busy enough on a weekend that passing cars sometimes need all of it.

Even with the little bit of road-running, I much prefer the Falls Creek loop to chugging up and down Vivian Creek. It’s a favorite I always enjoy!