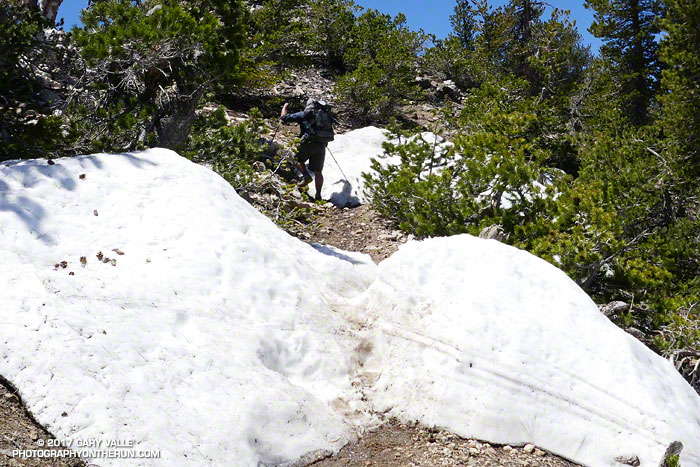 Each year around Memorial Day weekend I like to do a run that includes Mt. Baden-Powell (9399′). It’s a good time to check how much snow remains at the higher elevations of the San Gabriel Mountains. In a heavy snow season, such as 2004-2005, higher sections of trail may still be buried in snow and drifts can persist into July. In below average years, such as we experienced from 2013 to 2016, there may be little or no snow.

This was my third time on the PCT between Islip Saddle and Mt. Baden-Powell this Spring. The first was at the beginning of April and was more of a snow hike than a run. The micro spikes went on at 7000′, less than 0.7 mile from the Islip Saddle trailhead. The second trip was two weeks later, in mid-April. Micro spikes were still helpful in a couple of places and there was still plenty of snow on the north side of the crest. Based on other seasons with a similar amount of snow, I thought some patches of snow might last into June, or even early July. Today (May 27) only a few patches remain on Baden-Powell and along the crest, and these will soon be gone.

Except for being a little disappointed there wasn’t more snow, the run went well. The South Fork Trail was rocky and rough — as usual. The Manzanita Trail, which connects South Fork Campground to Vincent Gap, has seen a lot of work in recent years and is in relatively good shape. Even the gnats weren’t bad. I saw no one on the South Fork and Manzanita Trails. As might be expected on a Saturday on Memorial Day Weekend, there were “a few” hikers, thru-hikers and runners on the PCT.

The South Fork Trail is part of a long and little-used “official” PCT detour around the mountain yellow-legged frog closure at Eagles Roost. Based on the number of thru-hikers I see on Hwy 2, most opt to hike the 2.7 road miles between Eagles Roost and Buckhorn Campground and then descend the Burkhart Trail to the PCT. It’s been more than 11 years since the initial “temporary” closure of the Williamson Rock area in December 2005. Hopefully it won’t be too many more years before the proposed plan to reopen the PCT and partially reopen Williamson Rock is completed.