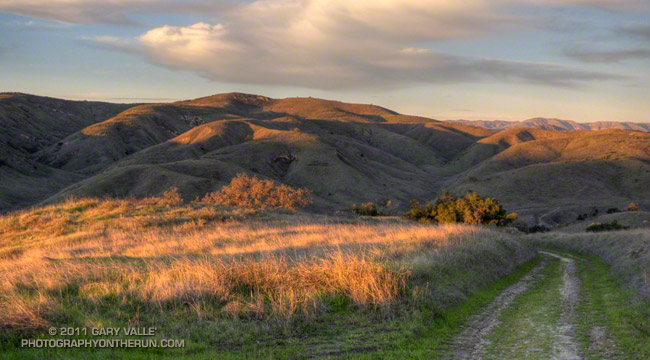 One of the circumstances of running in the afternoon during the Winter is that most of my runs end after sunset. That may or may not be a perk depending on the day and the weather, but here in Southern California it’s usually a great time to be out and about.

In the Los Angeles area the days with the earliest sunset extend from roughly November 29 to December 10, when the sun sets at about 4:44 p.m. Civil twilight ends about 27-28 minutes later, at around 5:11 p.m.

After that (and until mid July) the sun sets a little later each day. Through most of January each afternoon is about a minute longer. But those minutes add up. On January 31 sunset occurs around 5:23 p.m., nearly 40 minutes later than on December 10.

The title photograph was taken at about 4:47 p.m. on January 5, about 11 minutes before sunset, on a trail run at Ahmanson Ranch. I was nearing the top of a long hill, affectionately referred to as “The Beast.” The peak across the canyon is the high point of Ahmanson Ranch. On topos you’ll see it marked with the elevation 1842 ft.