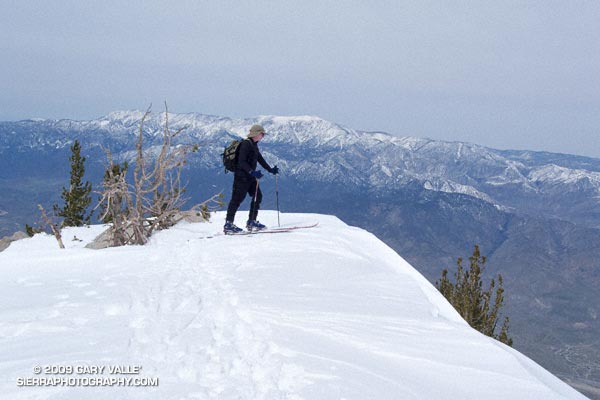 The wind had been blowing in fitful gusts, but calmed as I approached the precipice. Despite its foundation of granite, I felt exposed out on the narrow promontory of snow. Just beyond the tips of my skiis, the north face of San Jacinto Peak dropped 8500 dizzying feet to the desert floor.

The summit of San Jacinto (10,834′) is always spectacular, but with the addition of snow it is transformed into a peak with a high mountain character — a wild and wintry landscape shaped by wind and weather.

Our route to the summit was only four miles long, but with 8 lbs. of ski, boot and binding latched to each foot, the 2400 ft. ascent from the Long Valley ranger station had been strenuous. Rather than following the trail southwest toward Round Valley, we chose to ascend the east-west trending drainage that leads to Tamarack Valley. The steep maze of snow pillows, rocks and trees is a more direct alternative to the well-used Round Valley trail. 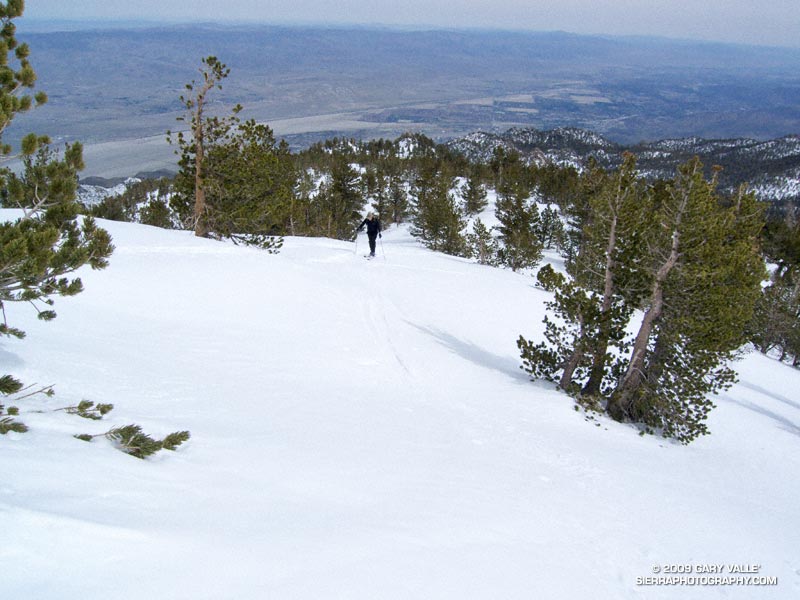 Once out of the maze, we continued west past Tamarack Valley, eventually working up onto the slopes below Miller Peak. From here we switchbacked up the bowl to the saddle between Miller and San Jacinto. From the saddle it was a scenic half mile up the broad east ridge to the summit. Here’s a Google Earth image, a Google Earth KMZ file, and a Cesium ion view of a GPS trace of our route.

Like any real world mountain, the snow conditions on San Jacinto are not always the best. However, today the snow was pretty good — maybe a 7 or 8 out of 10. It had snowed a few days before, and temps were just starting to warm up. The top 4-5 inches of the pack were dense, and the surface was soft. The sun was muted my a thin veil of high clouds, so the snow did not vary much in and out of the trees.

As we removed our climbing skins and prepared to ski down, Charles and I reminisced about skinny ski descents of San Jacinto, and other peaks. Like sticky rubber on rock climbing shoes, shaped skiis had changed the sport. Easier to manage and turn, shaped skiis handle crud so much better than long, narrow skiis with little side cut.

My initial turns off the summit were a bit tentative, but improved as we skied down through the Lodgepole pines on the east ridge. By the time we dropped into the big bowl southeast of the summit, I was getting my ski legs back, swinging turns, and feeling like it had been 3-4 weeks, rather than 3-4 years, since I had skied here.

Related posts: Room with a View; Rock on Rock, Snow on Snow