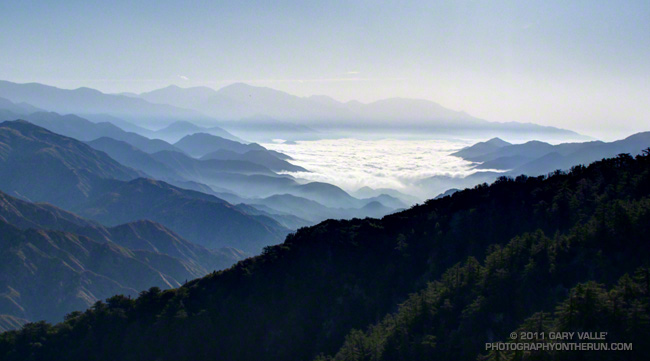 I stopped running and listened, it was eerily quiet. No airplanes overhead. No traffic on the road below. The silence triggered thoughts of this day, a decade ago.

Suddenly the silence was broken by the unmistakable sound of a jet fighter. Big engines, to the northeast of Mt. Disappointment. Not high, but high enough I couldn’t find the source in the haze and glare. Slowly the roar faded, and I started to run again.

Earlier this morning I’d heard a recording of that sound in a news report leading up to the 9/11 ceremony at the World Trade Center. The reporter had commented that in the scramble to intercept Flight 93, the fighters were virtually unarmed. Apparently the fighter pilots had been prepared to ram the plane. But as we know, other heroes were already taking action.

Faintly at first, I heard a growing, growling, thunderous sound* heading toward the mountain and started searching the sky. This time I saw them. Two  F-18s maybe three thousand feet overhead, in a long, arcing turn. Increased security? Part of a 9/11 memorial flyover? Something else? At the time I had no idea, but it put into focus the events of that day, and other days.

So many heroes, so many sacrifices…

*Video courtesy of a hiker near the Markam-Lowe Saddle.