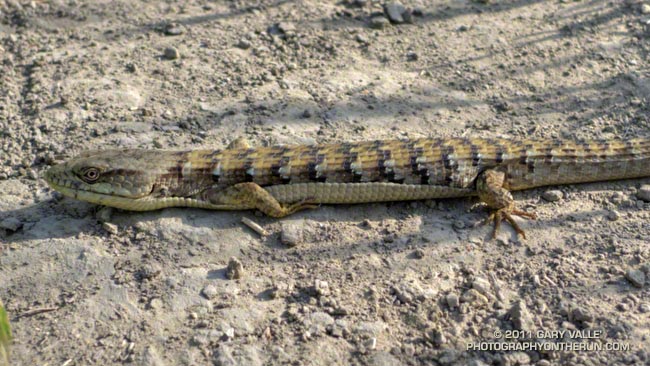 An alligator lizard (Elgaria multicarinata) sunning itself on a grassland or chaparral trail isn’t about to move unless it positively, absolutely, for sure, without question has to.

I’ve encountered (and jumped over) a number of alligator lizards while running Southern California trails, and don’t recall one ever being in a hurry to move. It’s a case of fight or flight — or just sit there. Putting the camera a few inches from its nose resulted in only an almost imperceptible tilt of the head. I can never decide if they’re playing possum, or maybe trying to decide if I’m too big to eat. And they will bite.

Because of their small limbs and long body, at first glance they are sometimes mistaken for a snake. When they finally do decide to move, they do so  using a rapid lateral undulation of their body, with little apparent involvement of their limbs. Some research has concluded that this form of locomotion is more energetically efficient (Gans, 1975), while other research (Walton et al.,1990) suggests that limbed and limbless locomotion may have similar energetic costs.

The alligator lizard appears to be part way through a transition from a fully limbed lizard to a more snake-like body with reduced limbs. This change in form has occurred in a number of species, and in a paper published in 2006 (Wiens, Brandly & Reeder) the question was posed why this trait repeatedly evolves in lizards and snakes. They postulate that in addition to more traditional explanations, that biogeographic isolation and competition may play important roles.