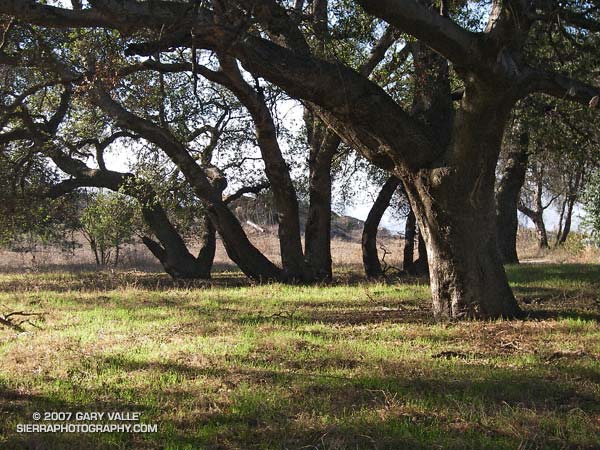 Updated January 10, 2008. The ESRL-PSD Composite ENSO plots page was updated today to correct an issue that resulted in the wrong set of years being used for its Winter La Nina composites. As a result the La Nina composite precipitation map in this post has been updated.

Grasses sprouting as a result of our record setting September rainstorm have brushed our sun parched hills, fields, and woodlands with pleasing hints of green. Whether these areas will remain green depends on how much rain we receive this Fall and Winter.

According to the Climate Prediction Center’s Weekly ENSO Update, issued October 1, La Niña conditions are present across the tropical Pacific and are likely to persist through early 2008. As a result, several longer range U.S. precipitation outlooks are similar to this Nov-Dec-Jan Precipitation Outlook, issued September 20 by the CPC.

The September 20 CPC outlook indicates an “equal chance” of below normal, near normal, or above normal precipitation in the Los Angeles area. However, the La Niña has strengthened recently, so the next precipitation outlook may reflect a more pessimistic projection of Los Angeles area rainfall.

As mentioned above, the ESRL-PSD Composite ENSO plots page was updated today to correct an issue that resulted in the wrong set of years being used for its Winter La Nina composites. This updated precipitation map shows the mean Nov-Mar precipitation for the U.S. during 9 La Niña events from 1948 to the present. Note that the average La Niña rainfall indicated for coastal Southern California is in the 7.0-10.5 inch range, rather than the  10-15 inch range previously indicated in the ESRL-PSD graphic.

The two driest water years recorded in Los Angeles since 1877 have occurred in the last seven years. During the most recent, from Jul 2006 to June 2007, downtown Los Angeles (USC) measured only 3.21 inches of rain. In that context 10-15 inches sounds quite wet! We’ll see.

The photograph of new grass sprouting amid oaks is from a run at Sage Ranch on October 1, 2007.