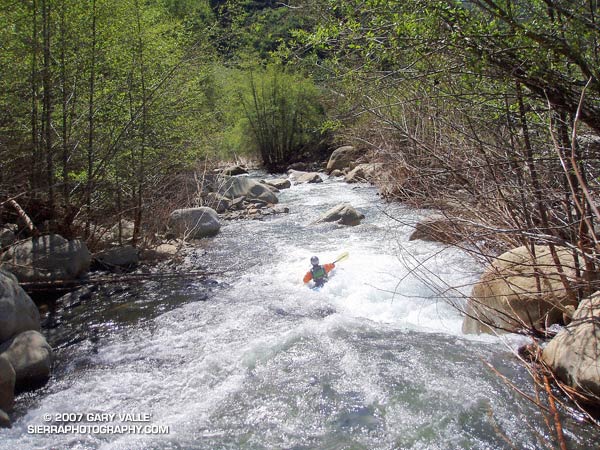 Running down the Silver Moccasin Trail from Shortcut Saddle to West Fork a couple of weeks ago, I mentioned to my running partner that a few years before, I had carried my whitewater kayak down the trail.

Around 1995, Gary Gunder and I started exploring the creeks and rivers of Southern California, looking for hidden gems that rarely – if ever – had been paddled. Kayaking these streams has been an incredible experience, and has enabled us to see some of the wildest and most beautiful places in the mountains of Southern California.

Creeking in Southern California is an “iffy” activity. Iffy in the sense that it usually takes a lot of rain for a stream to flow, and there is a very narrow window in which the flow will be ideal for paddling. In addition the canyons are steep and isolated, logistics are usually complicated, and more often than not it is necessary to carry your boat to the point on the stream where you put in. Paddling a stream can involve a hike of several miles, and a very long car shuttle. Several times we have gone to a creek, only to discover that it was too low to paddle. 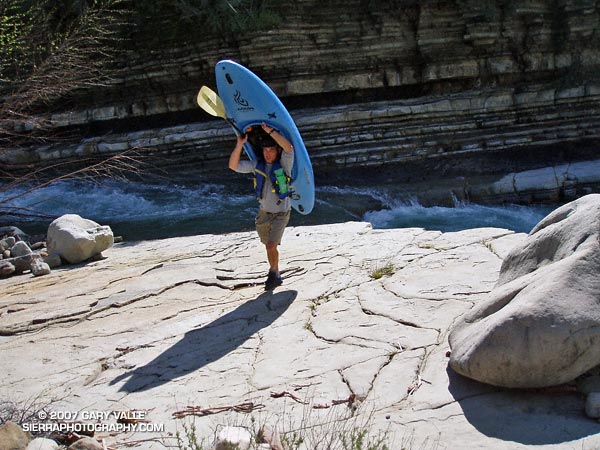 Plastic kayaks may look light, but kayaks made for paddling creeks typically weigh around 45-50 lbs. Add to this the weight of paddling gear, rescue equipment, food and water and the total weight might be 65 lbs. or more. If food and overnight gear for a multi-day adventure are added to the mix, the total weight can top a beastly 90 lbs.

There is no good way to carry a heavily loaded kayak and you can be certain that obstacles such as downed trees, swollen creeks, and washed out trails will have to be negotiated. Picture yourself carrying a kayak (as a backpack) across a steep snow slope, slipping and falling, and then going for the sled ride of your life, flailing like an upside down turtle with a 90 lb. shell!

In 2003, when we paddled the West Fork San Gabriel River, it rained very heavily the night before. The storm set a new rainfall record for the date, and I was sure the river would be too high. But what a day, and what a river! Skies were partly cloudy and shafts of sunlight filtered through the firs, glistening off the water, and highlighting the saturated greens of mosses, ferns, grasses along the river. Ephemeral waterfalls cascaded and fell from cliffs at several points. It was a wilderness paddler’s dream day.

It would be difficult to pick a favorite among the creeks and streams we’ve paddled. Each one has its unique character, scenery and challenge. The best multi-day runs would probably be a 47 mile reach of the Wild & Scenic Sisquoc River near Santa Maria, and a wilderness section of the Wild & Scenic Kern River from Grasshopper Flat, past Kern Falls, to the Forks of the Kern. The most technical would probably be the upper Santa Ana River downstream of Filaree Flats, Arroyo Seco below Switzers, and upper Matilija Creek above Old Man Creek. The most scenic might be Middle Piru Creek or Upper Piru Creek. The wildest might be Yucca Creek, a tributary of the N.F. Kaweah.

The best my legs have ever felt running trails is following a wet rain season with a lot of kayak hiking!

Note: The title photograph is from a March 5, 2005 descent of upper Matilija Creek, near Ventura, California.