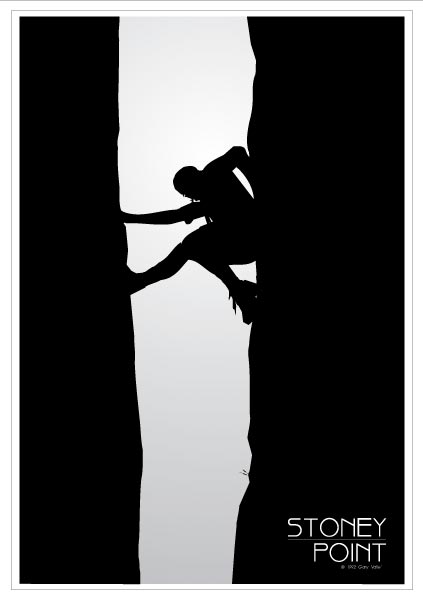 As long as we’re talking about split rocks, the poster above was based on a photo of mine from 1971 of “Split Rock” at Stoney Point, near Los Angeles. Rock climbers of my generation will recognize the Robbins’ “blue boots” that Tom is wearing.

This type of feature is called a “chimney” and the climbing technique being employed is called “chimneying.” Chimneys vary in width from a “squeeze” chimney, in which you can barely fit your body, to chimneys so wide it’s difficult to span their width. One side of Split Rock is average width and the other is a squeeze chimney.

Perhaps the most infamous chimney in the U.S. is the Narrows on the Steck-Salathé route on Sentinel Rock in Yosemite. The chimney abruptly changes from a comfortable width that is easily climbed to an impossibly narrow slot. It’s easy enough to get the top half of your body up into the slot, but the bottom half poses a significant dilemma. How do you make upward progress with your upper body wedged and your legs and feet dangling?

I think my upward progress into the slot might have been measured in millimeters per hour. At least it felt that way. It was so narrow that I could hold myself in place by taking a deep breath! Eventually I was able to get fully into the slot and then it was just a matter of being patient and threading my way through the remainder of the claustrophobic passage. (The photos of the Narrows in Climbing the Steck-Salathé by Guillaume Dargaud illustrate the situation well.)

From the top of the Narrows Ron and I still had a few more pitches to climb, and we topped out shortly before sunset. Around us the granite glowed in a rich golden light — the kind of light that seems only to be found on mountains, rivers and other places the sharp edge of adventure dwells.

The day had been long and challenging, but we were not done — we still had to get down. By the time we reached the upper section of the descent gully it was starting to get dark. There were still patches of snow in the gully and the temperature was dropping. Rather than risk a fall on frozen snow or meltwater, we opted to bivi.

Skies were clear and the night was going to be cold. We didn’t have much in the way of warm clothes, but we did have matches and started a small fire on the granite ledge that was going to be our lodging for the night. About the time we were settling in, two headlamps came bobbing down from the direction of Sentinel. The climbers had just come off the Chouinard-Herbert route and were more than happy to call it a day. We shared our meager resources, and with the fire we all had enough to get by.