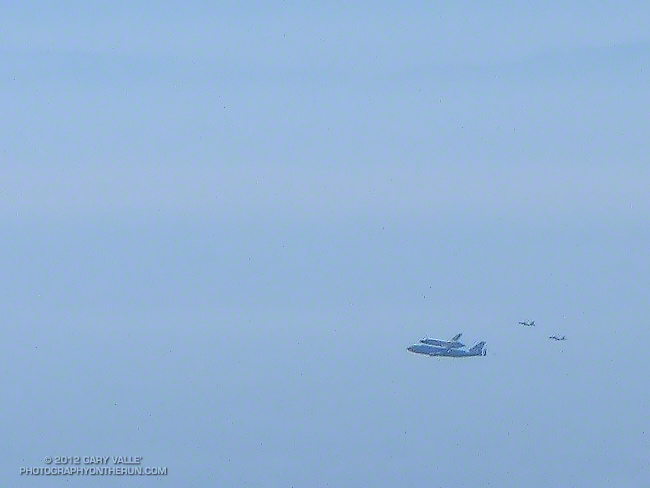 I’d run up from Cold Creek on the Stunt High Trail and Backbone Trail and hadn’t seen a soul until on the service road that connects Saddle Peak’s twin summits. Usually you’d only see telecommunication workers, hikers and trail runners on the peak. Not this morning!

Cars where I’d never seen cars before — parked on the eastern summit of Saddle Peak, parked on the western summit of Saddle Peak. Parked in every turnout on the roads below the peak. People were perched on every rock outcrop and vantage point from which they could see the Malibu coastline. Everyone was waiting for the Shuttle Endeavour flyover of Malibu!

I’d debated other vantage points including Sandstone Peak,  Mugu Peak, and Will Rogers near the bridge. I’d finally opted for Saddle Peak, hoping that the flyover of Malibu would be over Malibu and not off the coast.

As it turned out the Shuttle transport’s flight path was well offshore. This combined with Saddle Peak’s 2.5 mile distance to the coast made for an impossible shot with the 90mm max focal length of my Lumix LX7.

No matter; it was still fun to do the run, spot the Shuttle, and try to get a shot with my normal running camera!