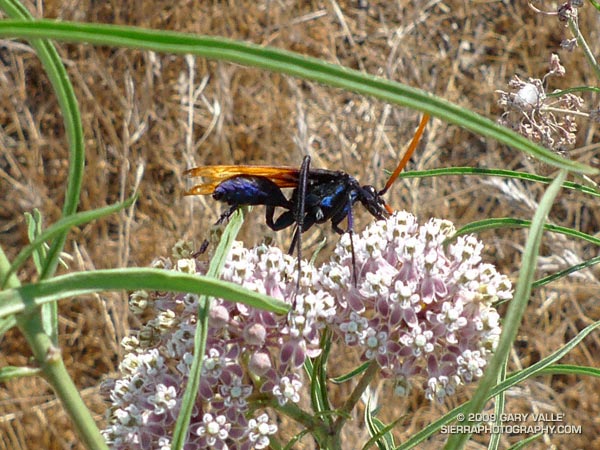 Its menacing body glistening a deep iridescent blue, a tarantula hawk wasp feeds on the flowers of a narrow-leaf milkweed.

I haven’t found these huge wasps to be particularly aggressive, but I’m not sure at what point a digital camera held inches  from the alien-looking insect becomes a threat — and I don’t want to find out! 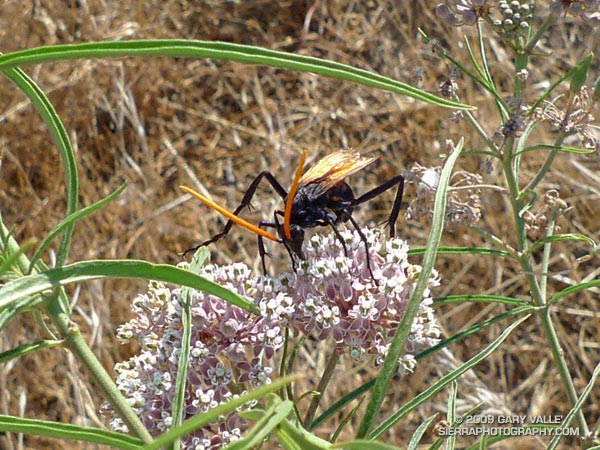 The following is from the paper Venom and the Good Life in Tarantula Hawks (Hymenoptera: Pompilidae): How to Eat, Not be Eaten, and Live Long:

“Tarantula hawks produce large quantities of venom and their stings produce immediate, intense, excruciating short term pain in envenomed humans. Although the instantaneous pain of a tarantula hawk sting is the greatest recorded for any stinging insect, the venom itself lacks meaningful vertebrate toxicity. …the defensive value of stings and venom of these species is based entirely upon pain. This pain confers near absolute protection from vertebrate predators.”

While photographing the wasp, I also took this short HD video. From a run earlier this week at Sage Ranch Park.