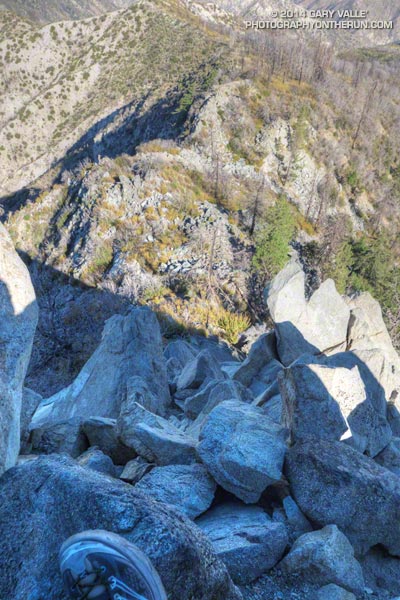 It was about 8:30 a.m. and I was nearly to the top of the steep, rocky ridge on the west side of Strawberry Peak. I gazed over the rocks and ridges to the layer of stratus that partially filled the Los Angeles basin and valleys and tried to find Saddle Peak or Castro Peak. These peaks would mark the location of Malibu Creek State Park. Today some friends were doing the Bulldog 50K and I wondered if the marine layer was too shallow to take the edge off the heat forecast for later in the day.

I’d done the circuit around Strawberry in July a couple of weeks before the Angeles Crest 100. Today’s hike, run and climb over the top of the peak was a fun way to continue to recover from the exertions of that event. As was the case with the Strawberry Peak Circuit, I started the loop at Clear Creek, but it is also possible to start at Switzer’s Picnic Area or Red Box.

Like anything adventurous, if it’s in your comfort zone the challenges can be fun; if not, the adventure can quickly turn into a nightmare. This route requires rock climbing and route-finding skill and a bad choice can ruin your whole day.  Strawberry Peak has been the site of numerous search and rescue operations. The rock on the west side of the peak is of variable quality and if you go off-route it’s easy to become trapped in a spot where you can’t safely go up or down.

Not only is the route-finding tricky on the rock climbing sections. As a result of the growth of Poodle-dog bush following the Station Fire, the use trail on the upper ridge on the west side of the peak is more circuitous than it used to be. Although much of the Poodle-dog bush was wilting and in some cases dying, it can still cause dermatitis. By staying on the use trail it was mostly avoidable. There was a bear track on this section of the ridge and I wondered if the tracks I’d seen on the Strawberry Peak Circuit were from the same bear.

The last section of rock climbing ends abruptly just below the summit. The use trail on the east side of the summit involves no rock climbing and sees much more traffic. Though steep and loose, by fell-running standards it is mostly runnable. At Lawlor Saddle the maintained trail begins and continues to Red Box. From there the loop is closed using the Gabrielino Trail and Nature’s Canteen Trail. Since I was last on the trail in July, the Nature’s Canteen Trail had been re-cut and was in great shape.