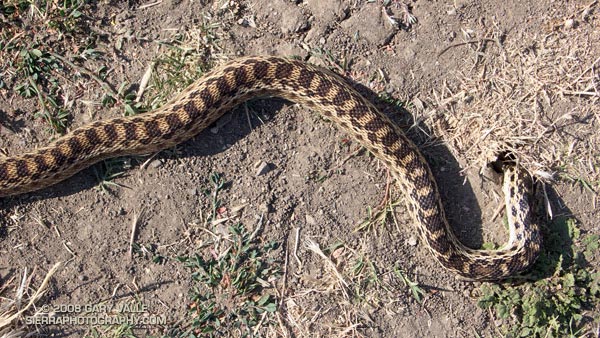 Was that a snake on the trail ahead?

It was a snake — a pretty big one — stretched across two-thirds of the road.

I slow, stop running, and then walk carefully toward it. The snake is dead still. A confounding series of thoughts follow in quick succession.

At least 30 seconds have passed and the snake has not moved — not a millimeter. Very weird. Is it dead? It doesn’t look dead. There’s no blood.

Realization dawns as I comprehend the snake may be caught in the entrance to a small burrow.

Com’on, stuck? If so, it’s in a bad place. Pick your peril: Upper Las Virgenes Canyon is hiked, biked, ridden on horseback, roamed by coyotes, and hunted by hawks.

Now it’s been a couple of minutes, and the snake still has not moved. I’m beginning to think maybe it is dead. So I touch it.

Panic! The snake writhes, contorts and convulses in an attempt to free itself. No go — it continues to convulse, and then suddenly, and impossibly, slithers down the hole.

What? My guess is that the snake had found a lizard, mouse, or other prey in the hole, started to swallow it, and with its body engorged, became trapped by its meal. Or maybe it just got stuck!